"The land of fire, the land of wind, qutab and cay" - Italian student about Azerbaijan - PHOTOS | Eurasia Diary - ednews.net

"The land of fire, the land of wind, qutab and cay" - Italian student about Azerbaijan - PHOTOS 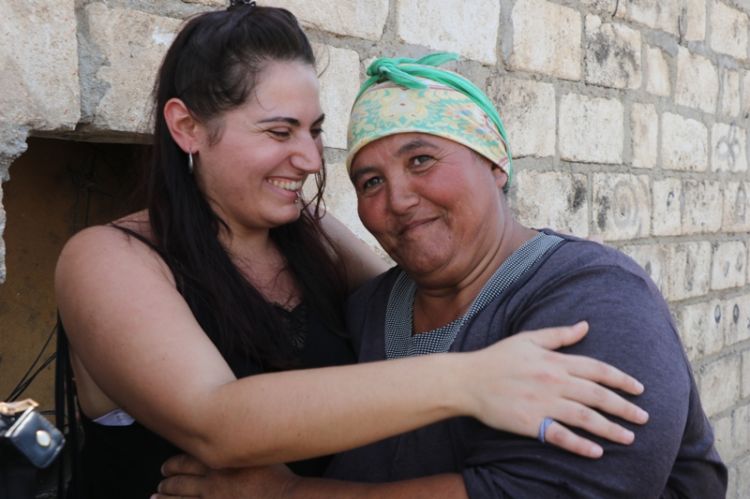 In July, some international students came to Azerbaijan as a part of a volunteer program supported by the international organization AIESEC. Within the course of 6 weeks, they took part in 2 social projects covering the problems of gender equality and ecosystem protection. Some public sessions were organized in partnership by the International Eurasia Press Fund (IEPF) and AIESEC and were held in the office of the Fund.

Within the part of the program, the IEPF organized the visit of 16 international students from 9 countries (Italy, Portugal, Serbia, Ukraine, Turkey, Russia, Austria, Lithuania and Germany) to the Terter, war-affected region of Azerbaijan. Veronica Forte from Italy was one of the students who was informed with the realities of the Armenia-Azerbaijan Nagorno-Karabakh conflict and the Armenian vandalism in the villages of Shikharkh and Hasangaya, which were destroyed. Foreign students also visited the Maragha-150 monument in Hasangaya.

Eurasia Diary presents an article written by Veronica Forte about her stay in Azerbaijan.

"Six weeks ago I came for the second time in the place that made me feel at home, the place in which five months ago I felt so many different sensations that I decided to analyze deeply, one week was not enough. Here I am.

I decided to enter in AIESEC world and start my adventure here in Azerbaijan, in Baku, with a project about gender equality.

Since when I arrived, many different things happened, the project wasn’t really what I expected, but life never give us what we expect, life surprise us, we have to be able to take the best every time and work on it.

I could listen many opinions from local people, many experiences that made me understand more the situation around. I learned how much traditions can be strong, how the family can be a limit.

We have power, we only need to know how to use it. The power that I’am talking about is not power over others, is power as good energy, power as strength to be free.

Some months ago I have read a book “A taxy driver in Baku”, the second part of the book was “Kamala histories”, I read about women that suffered because of the war in Karabakh, women that had to escape from their lands and raise their children alone. Women that since that moment cannot breathe.

I understood that many other regions around Nagorno-Karabakh are still occupied, that many people live as refugees in their own country, many of them lost everything, some of them try to not speak about their past, their roots, others want to fight and take back their freedom. It’s hard when after more than 20 years still no one is telling the truth, and the International community doesn’t really know how is the situation there.

In the middle of my experience in Baku, thanks to our Project Manager, we had the opportunity to know about the International Eurasia Press Fund (IEPF), we met the president of the Fund, Umud Mirzayev, that with a big emotion in his eyes kindly explained us about the conflict, we saw pictures and video, we felt his pain, we felt the pain of people that play no role in this ugly game.


We all were impressed, we all wanted to see with our eyes, we didn’t really know how to help, what to do but we felt we had to do something.


After some weeks the IEPF organized a visit to Tartar, we could be able to go there, so close to the fontline. I didn’t really knew what expect, I started the trip with a lot of positive energy, I wanted to spread positivity and hope.


The first stop have been in the regional office of IEPF in Tartar, after a short meeting with the local authorities we entered in the monitored area. We could see what is left of the monument “Maraga 150”, we could hear what happened, how and why. In that moment I started to feel less positive energy, I couldn’t stand at such horrible situation. Many questions came to my mind. Finally we arrived in one of the last village close to the frontline, few houses, a lot of ruins around, we stopped in front of an house, or better, what was before an house, a place in which only three years ago a sixteen years old girl died. This girl died cause three years ago someone decided to end the cease-fire and there have been days of escalation, days in which many people died. Again people that play no role in this game died. In front of us, the mother of the girl, another woman, two old men, one kid. I had no words, for some minutes I had no smile to give them, I felt as the women in “Kamala histories”, I felt without breathe. Many questions, my positive energy was running away for make space to anger and disappointment. But anger will never help us to solve conflicts, to help who is living the effects of a conflict. We all were there, watching, we all in that moment felt the same pain. We came back to the regional office of IEPF, we had an amazing chat with the kids that participate at the Azerbaijan Youth Advocate Programme, they gave me back hope. These kids got a lot of power, they are young and smart and full of positivity. These kids are the future, I wish them to go on, to be always pure and follow their morality. This country, this world needs these kids and our duty is to help them to  succeed.
Let’s spread the voice, let’s give the opportunity to everyone to know what is going on, only if people knows we can work on a solution."