Persons with special needs participated at public discussions in Tartar 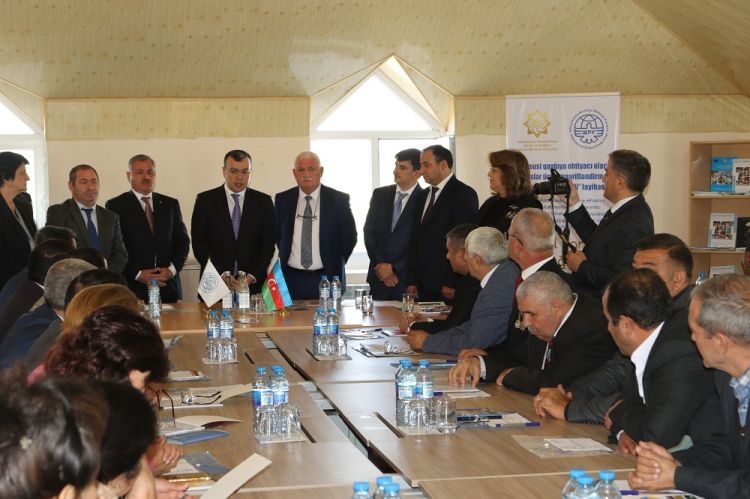 Within the framework of the project "Organising Public Awareness for Persons with Special Needs" implemented by the International Eurasia Press Fund (IEPF) with the social order of the Ministry of Labour and Social Protection public discussions held in Tartar region of Azerbaijan. The discussions following the topic “From Social Dependence to Self-Employment” took place at the building of the regional vocational training centre in participation of the working group of the Public Council on Labour and Social Protection and Employment. Eurasia Diary reports that the discussions were attended by staff of the Employment Center of the State Employment Service under the Ministry of Labour and Social Protection, Zaur Guliyev, head of the working group on labour and social rights and employment, Council members Irada Rzazade, Mammahasan Hasanov, project managers, community leaders and applicants to the self-employment program.
In his opening speech, IEPF Vice President Ramil Azizov informed the participants about the successful social reforms in the country and the ongoing project. The head of the working group, Zaur Guliyev, spoke on self-employment, how to apply for the program, the impact of the self-employment program on social assistance, and the direction of its activities.
During the event NGOs and participants gave their opinions and proposals. It was noted that the proposals and recommendations mentioned in the discussions will be sorted through the project experts and submitted to the relevant authorities and will be followed up with the social co-ordination of citizens' appeals.
Minister of Labour and Social Protection of the Population Sahil Babayev, Chairman of the Public Council under the Ministry Umud Mirzayev and Head of the Executive Power of Tartar District Mustaqim Mammadov also attended the public discussions. Sahil Babayev emphasized the significance of social awareness work and importance of such activities in the future and spoke about progressive social reforms. In his turn, Umud Mirzayev also spoke about the importance of organising activities for improving vocational education and skills for people from vulnerable groups using the available resources.
Minister Sahil Babayev visited the Community Based Social Rehabilitation Centre for Children with Disabilities founded by IEPF in Tartar. About 50 children with disabilities have been provided with services at the centre. The centre has been brought to the attention of the minister on the use of modern rehabilitation techniques such as active therapy and game therapy to address the mental and physical problems that children face in their daily lives through functional assessment.