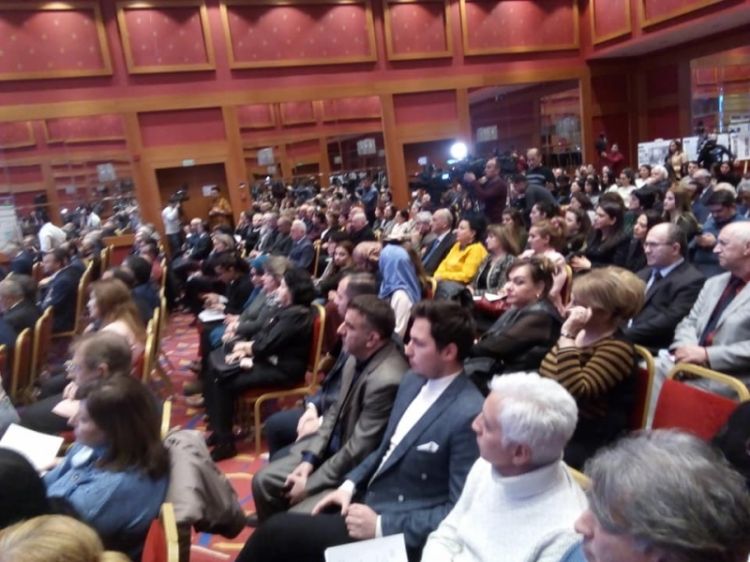 A collective appeal to the President and First Vice-President of Azerbaijan ended the first day of a scientific and practical conference in Baku on the intention of the initiative group to create the House-Museum of the creator of ADR Mammad Amin Rasulzadeh (1884-1955) in Baku, Eurasia Diary reports citing Turan News Agency.

In an appeal to the leaders of the state, more than four hundred participants in the international conference on the topic “The legacy of Mammad Amin Rasulzadeh in the system of values ​​of Independence, Democracy and Statehood” asked the President of Azerbaijan and the President of the Fund M. Aliyeva to take personal control and financing of the creation of the Rasulzadeh House Museum in Baku, at 65 Nizami Street. In the apartment at this address, the Rasulzadeh family lived before their emigration to Europe. The creator of the Public Group House Museum of M.E. Rasulzadeh and its leader, Doctor of Historical Sciences Solmaz Rustamova-Tohidi, believes the work to create the House Museum is part of the tasks set by the President two years ago, during the celebration of the 100th anniversary of the creation of the first democratic Azerbaijan Republic in the Turkic and Islamic world, and will be a manifestation of the unity of the people with the state.

On the first day of the conference, representatives of Azerbaijani emigrant societies in Turkey, Iran, the Netherlands, Hungary, Russia, Georgia, Ukraine, Spain and other countries, cultural and scientific figures of Azerbaijan and Georgia, and activists of the independence movement of Azerbaijan in the late eighties and early nineties spoke. The general idea of ​​the speakers was the words of S. Rustamova-Tohidi, who said that it’s unworthy for our country to not have in Baku the House Museum of the politician who created the independent Azerbaijan Republic, while in Baku there are House Museums of Nariman Narimanov, Samed Vurgun and other Soviet figures. It is not appropriate for Azerbaijan to forget the intention to erect a monument to Rasulzadeh in the center of Baku, she added, recalling that the sculpture of the creator of the ADR was created by Omar Eldar and is stored in his workshop.

The value of M.E. Rasulzadeh for the whole Turkic world was reported in the speech by the Turkish Ambassador to Azerbaijan Erkan Ozoral.

The representative of one of the Azerbaijani organizations of the Diaspora in Russia (Chairman Fizuli Mammadov) promised to take on the financing of the repair of the House Museum. Other Diasporas promised to give the House exhibits from the time Rasulzadeh lived in Poland, Germany and Turkey.

In the speech by a Georgian scientist from France, Georgy Mamulia, information was heard on the principles of M.E. Rasulzadeh in promoting the idea of ​​creating a Trans-Caucasian confederation with the participation of Azerbaijan, Georgia and the North Caucasian peoples. Armenia, as always, evaded such initiatives,” G. Mamulia added.

The head of the Dede Gorgut National Fund, Eldar Ismayilov, called M.E. Rasulzadeh Father of the Nation, and the theater director Ramiz Hasanoglu told how he, as part of a theater tour in Turkey in the 1990s, brought some ground from the Novkhany village native to the Father of the Nation to Rasulzadeh’s grave in Ankara.

The evening ended with a speech by young activists of the movement and a grateful speech by the grandson of the Chairman of the ADR parliament, Reis Rasulzadeh.

The first meeting of the conference was held at the Park Hyatt hotel. On January 31, on the birthday of Rasulzadeh, the second final meeting will be held at the Institute of History of the Azerbaijan National Academy of Sciences.