"Being a civil society organisation, we are proud to be part of such an important mission." - IEPF President - PHOTOS - ednews.net

"Being a civil society organisation, we are proud to be part of such an important mission." - IEPF President - PHOTOS 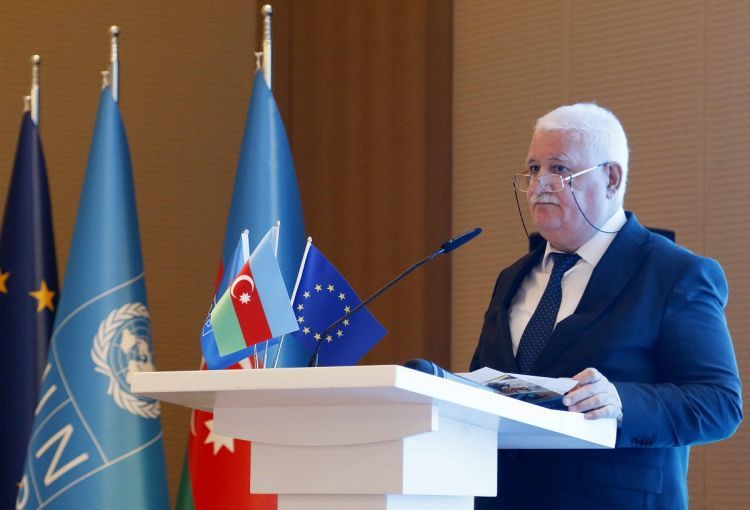 The presentation of the project "Provision of early rehabilitation assistance for the protection of the population affected by the conflict, housing and economic security in Azerbaijan" has taken place.

The project will be implemented by the European Union (EU) Civil Defence and Humanitarian Aid and the United Nations Development Program (UNDP), Ednews reports.

The event provided information on the EU-funded Early Restoration Action Project. It was stated that the project will support demining activities on the former contact line and help improve the well-being of low-income families living in these areas by providing them with various means of subsistence. It will also provide direct and urgent short-term support to 1,500 people and their families dependent on agriculture.

The project will also assist in the preparation, equipping and deployment of emergency response teams to participate in humanitarian demining activities led by the Azerbaijan Mine Action Agency (ANAMA). This demining component will benefit 43,000 people living near the former line of contact who are at risk of mines and unexploded ordnance. 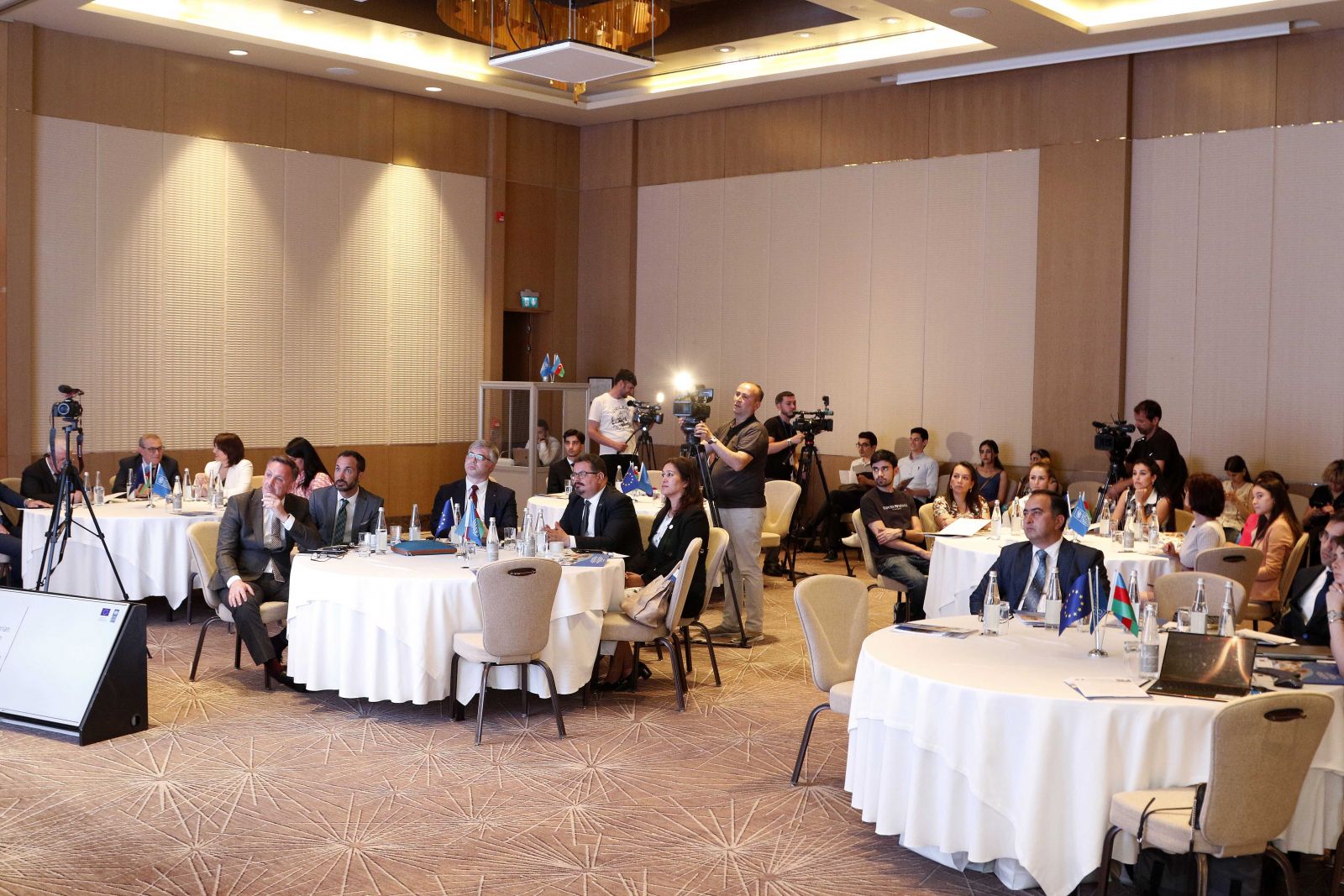 EU Ambassador to Azerbaijan Peter Michalko has given information about the project. 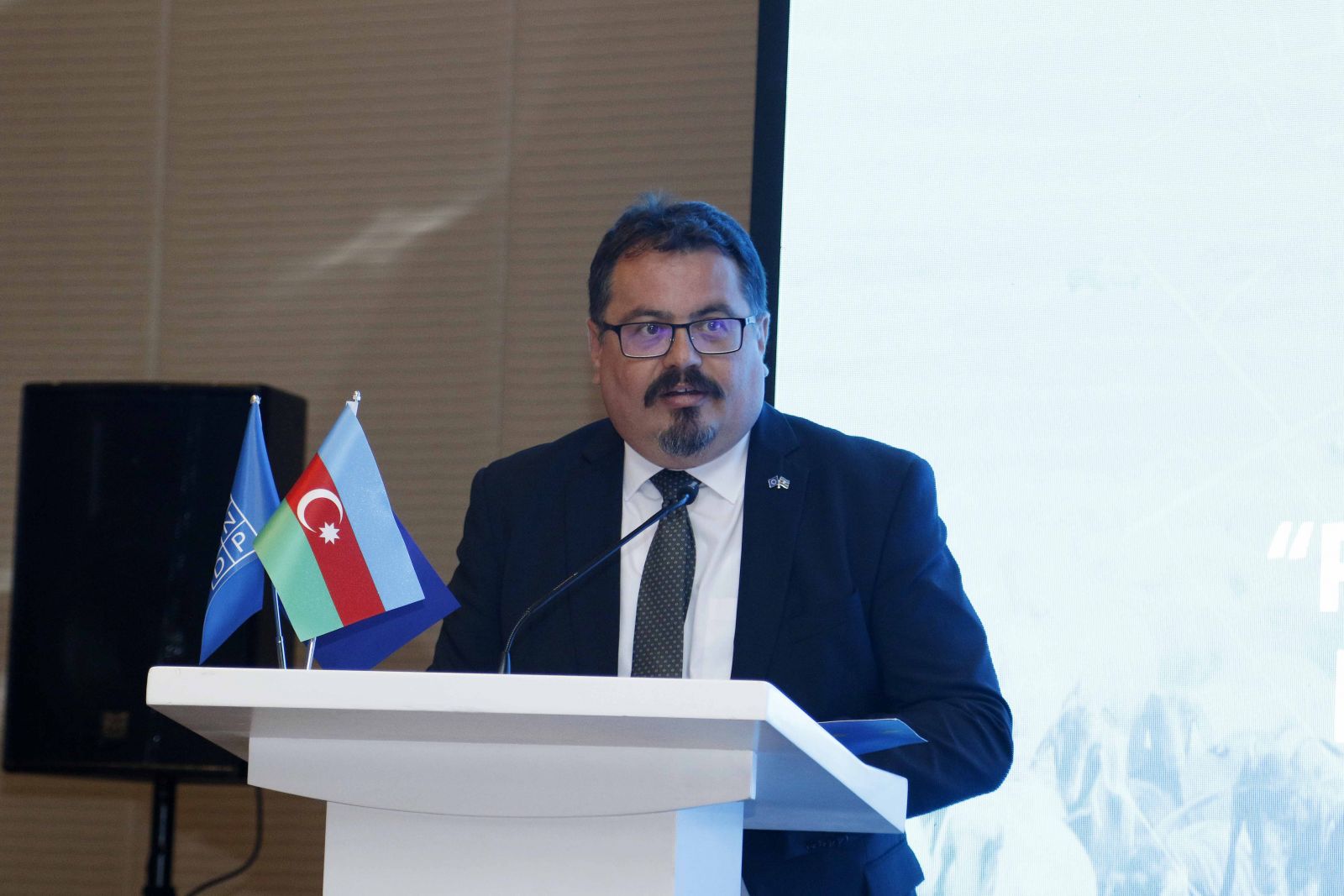 "Mines are terrible weapons that make no difference between the military and civilians. The European Union supports Azerbaijan's demining efforts. This project will benefit people whose lives are at risk due to unexploded ordnance after the conflict, and we hope it will help save their lives. We intend to see the South Caucasus free of mines. International partnership is important to address these risks. We are always ready to support the return of the population to the liberated territories in Azerbaijan. This support will continue in the future."

Acting UNDP Resident Representative Charu Bista stressed that investing in humanitarian demining is the key to achieving the 2030 Agenda. 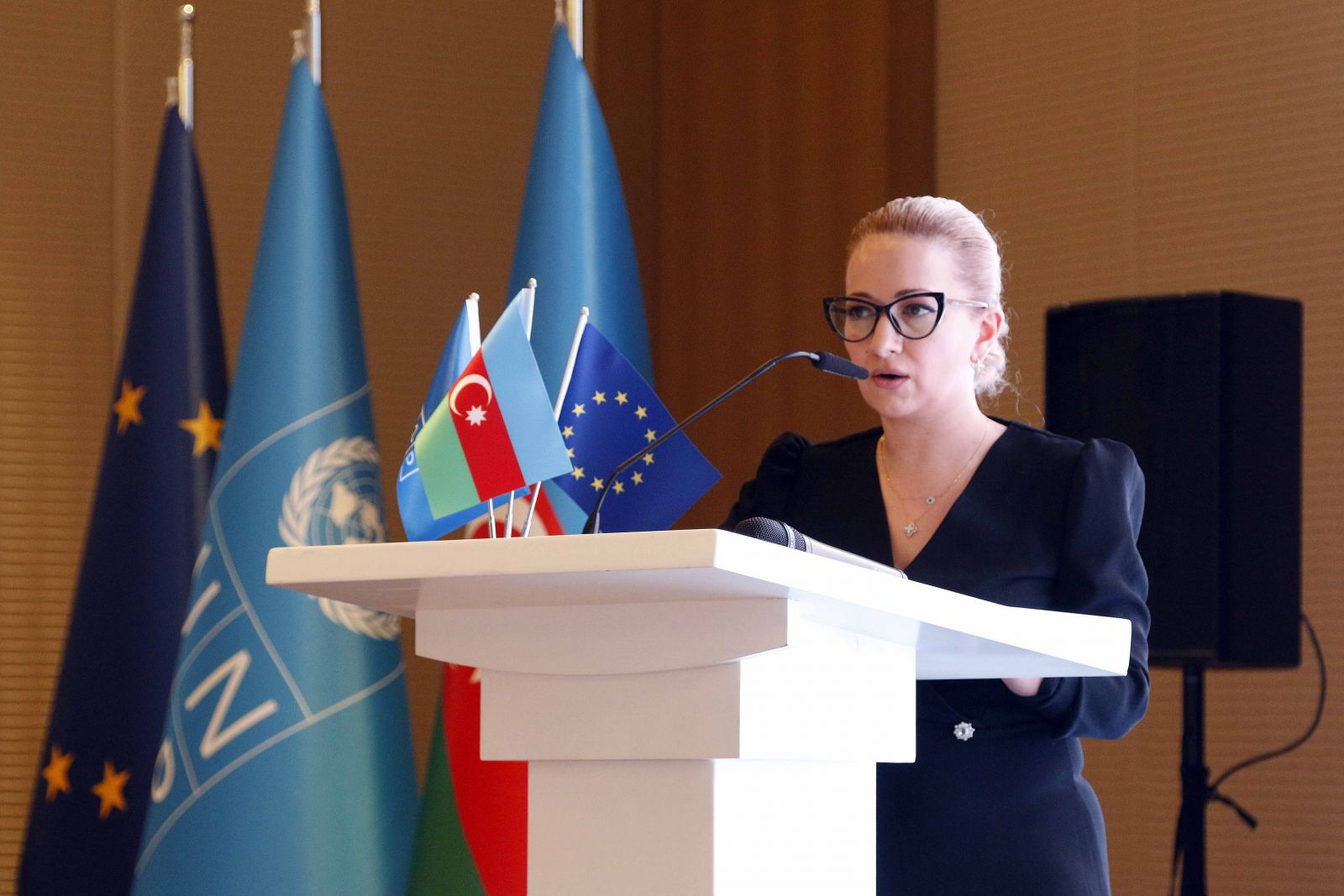 "UNDP has had a long-standing partnership with ANAMA since 1999. Together, we have helped clear more than 806,000 mines and other explosive ordnance in recent years, and ensure the safe return of more than 160,500 IDP women, children and men. Women are the biggest victims of conflict. This project will also help them. Thanks to EU funding, we will now be able to expand this support and provide direct assistance to those who need it the most to improve their lives and livelihoods."

Deputy Chairman of the Azerbaijan Mine Action Agency Samir Poladov noted that ANAMA is working to ensure a safe and secure return of the population to the liberated areas. 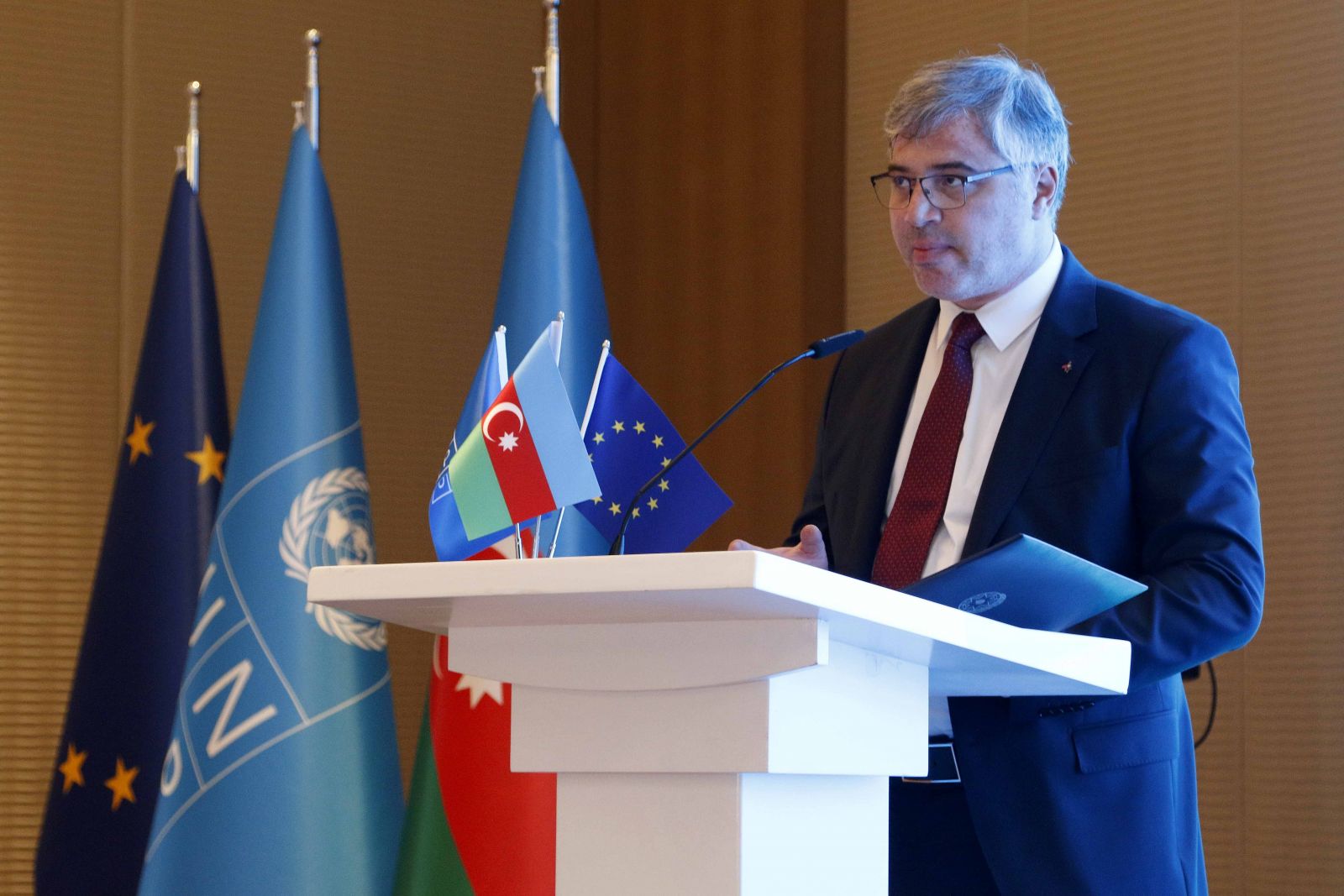 "It also supports projects implemented by international organisations. Since its inception, the agency has cleared about 60,000 mines from 32,000 hectares of areas. Since November 2020, 39 people have been killed and 184 injured in landmines in the liberated areas. In total, the number of victims is 223 people."

President of the International Eurasia Press Fund Umud Mirzayev said that the IEPF, which is going to celebrate its 30th anniversary this year, is an independent non-governmental organisation operating since 1992. 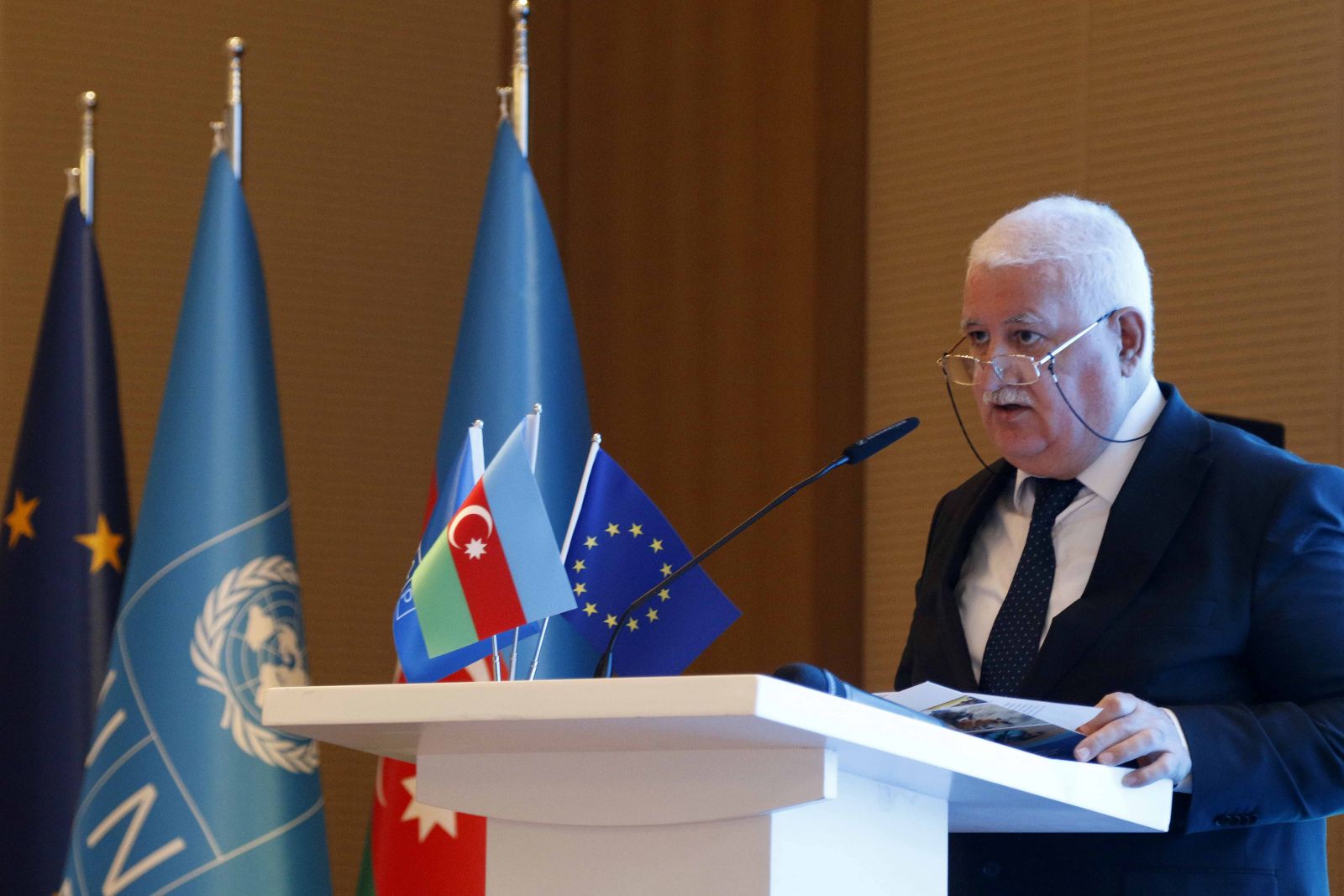 "The IEPF is a key member of the UN ECOSOC with General Consultative status. The IEPF has joined the UN Mine Action Program in Azerbaijan since the early 2000s with the support of the United Nations Development Program. Over the past period, it has successfully implemented important programs such as the First Level Land Impact Survey (LIS), and the Study of the Needs of Mine Victims. The IEPF Community Mine Action Team, established in 2002 with the financial support of the Embassy of Japan in Azerbaijan, is currently active in the Tartar region with 84 staff members. Also, with the financial support of the European Union, UNICEF and ANAMA, the Explosive Ordnance Risk Education (EORE) project is being implemented by the IEPF in 6 mine-affected regions. The IEPF is one of the main partners of the Azerbaijan Mine Action Agency (ANAMA) in the process of clearing the territories of Azerbaijan of war remnants and mines,” Mirzayev said.

He noted that on April 29 this year, the IEPF and the UNDP signed a grant agreement entitled "Provision of rehabilitation assistance for the protection, livelihood and economic security of the population affected by the conflict in Azerbaijan."

"The project, implemented with the financial support of the European Union, the United Nations Development Program, ANAMA and the International Eurasia Press Fund, covers areas of Azerbaijan contaminated with mines and along the former line of contact. According to the agreement, the action plan envisaged in the project will be implemented on the basis of priorities set by ANAMA.

As can be seen from the presentation, the project activities are carried out in two main areas. Accordingly, a total of 9 Non-Technical Survey (NTS) teams were formed, each with 3 surveyors. Another key area, Explosive Ordnance Disposal (EOD), has a total of six staff members, including group leader and deputy group leader. First, the team members who participated in the trainings at ANAMA's Goygol and Horadiz regional bases and the IEPF's Tartar regional office have been fully ready for operations.

According to the president of IEPF, non-technical survey teams will conduct survey along the former line of contact and in the liberated areas.

"The main goal here is to conduct a systematic non-technical survey to better determine the nature, extent and impact of contamination with explosives. It should also be taken into account that one of the issues that the country's leadership is paying more attention is the problem of mines, which delays the great return to Karabakh. Since the November 10, 2020 statement alone, more than 200 people have been killed by landmines. In this case, the implementation of this survey project will be of great benefit in terms of construction, acceleration of reconstruction work and the safe return of the population in the direction of the revival of the liberated territories. As a result of the project, support will be provided to demining operations in Azerbaijan and will contribute to accelerating the process of returning to the liberated territories.

At the end of his speech, Mirzayev thanked ANAMA, which has supported the project since day one, made great efforts to solve the country's mine problem for many years and kept this problem on the international agenda.

"I want to mention to you about all the heroes working in the field of demining today, and I wish them success in this difficult task. I also express my deep gratitude to the European Union and the United Nations Development Program for their attention and sensitive approach to this humanitarian problem in Azerbaijan.

Being a civil society organisation, we are proud to be part of such an important mission.”