AlJazeera published an article about the International Eurasia Press Fund 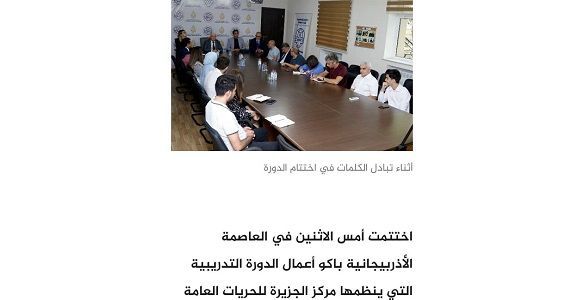 As reported earlier, on September 5, the training co-organized by IEPF and  "Al Jazeera" Media Network for Arabic-speaking journalists ended.

The article was published on the Al Jazeera Media Network Center for Public Liberties and Human Rights website and on the Aljazeera.net news portal.

Al Jazeera Arabic, launched in 1996, is the first independent news channel in the Arab world that provides comprehensive news and live discussions.

Launched in 2006, Al Jazeera is part of a growing network of more than 10 English-language channels and divisions.

"Aljazeera.net" news portal has more than 3-5 million visitors per day.

It should be noted that according to the mutual understanding of the two partner organizations, Al-Jazeera Media Network will share its experience and standards in the field of electronic and new media with IEPF, its main partner in the region.