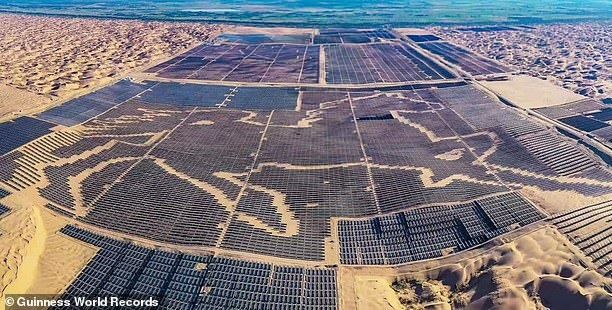 China has built a massive solar farm the size of 195 football pitches in the shape of a galloping horse, Daily Mail reports.

The photovoltaic power station was connected to the grid last December and was crowned as 'the largest solar panel image' by the Guinness World Records last week.

Situated in the Kubuqi Desert, the solar farm is a stone's throw from China's spooky 'ghost city' Ordos in the Inner Mongolia Autonomous Region.

The animal design is inspired by the area's horse husbandry industry and horse-racing tradition from the Mongolian herdsmen.

The project is part of a solar power theme park in the Kubuqi, which in turn is part of the local government's effort to explore tourism and energy resources in the desert.

The farm is expected to generate four billion kilowatt-hour every year, according to Ordos ,News.