Taiwan's government has said it would provide assistance to Hong Kong protesters on humanitarian grounds. The pledge risks straining the already tense relationship between Taipei and Beijing. 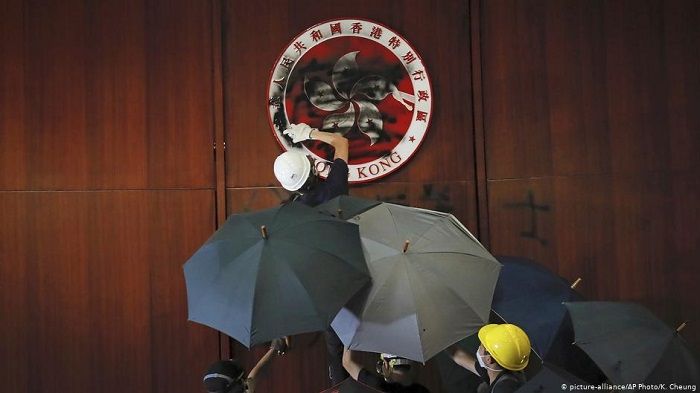 "These friends from Hong Kong will be treated in an appropriate way on humanitarian grounds," Taiwan's Central News Agency quoted her as saying during a visit to the Caribbean island of Saint Lucia, one of Taiwan's few remaining diplomatic allies.

Tsai made the comments in response to news reports that some Hong Kong protesters, who stormed the city's legislature on July 1, were considering seeking asylum in Taiwan.

Over 30 protesters who fear prosecution for their involvement in the ransacking of the legislature have arrived in Taiwan to seek shelter, Taiwan's Apple Daily said, citing unnamed sources. The report said the activists are staying in various locations and that some are receiving assistance from local NGOs.

Hong Kong, a semi-autonomous Chinese city, has been rocked by tensions between protesters and authorities over the past several weeks. The trigger for the mass protests was a proposed law that would have allowed extraditions to mainland China and other countries.

Tsai's statement risks irking Beijing at a time when the China-Taiwan relationship is already strained.

It comes after Tsai earlier this year denounced Chinese President Xi Jinping's plan to apply to Taiwan the same "one country, two systems" principle that Beijing applies to Hong Kong. Tsai called it a threat to the "free and democratic lifestyle" of the self-governing island.

Taiwan is scheduled to hold a presidential election in January 2020 and cross-strait relations are set to be a dominant issue.

Tsai, who's seeking a second term, has described the 2020 presidential election as a "fight for freedom and democracy," setting herself up as someone who can defend Taiwan from an increasingly assertive Beijing.

Her main opponent from the more China-friendly Kuomintang party, Han Kuo-yu, has advocated warmer ties with the mainland.

Taiwan has had its own government since 1949, when the Chinese Nationalists fled the mainland after losing a civil war to the Communists. Beijing views the island as a renegade province and has vowed to seize it.

Meanwhile, Taiwan's Mainland Affairs Council, which oversees the island's policies on China, declined late Thursday to confirm whether any requests for political asylum had been made by Hong Kong protesters.

But it issued a statement on Friday saying it would handle such cases "under the principle of respecting human rights protections and humanitarian concerns."

"(We) can provide necessary assistance to Hong Kong residents whose safety and freedom are in urgent danger due to political reasons," it said.

Taiwan's history of providing sanctuary to Chinese dissidents has been mixed. The island does not recognize the legal concept of asylum but has occasionally allowed dissidents to stay on long-term visas.