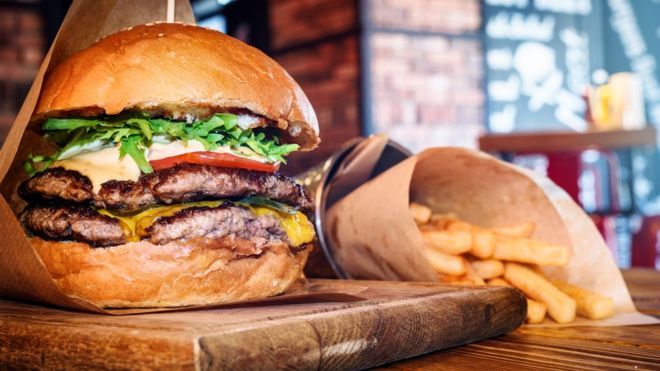 Friends of the Earth said eating less meat is crucial to reducing emissions.

But the Welsh meat farming sector said the focus on meat was "wrong-headed" and Welsh farming is largely "non-intensive".

A report produced by the UN's Intergovernmental Panel on Climate Change stopped short of calling on everyone to become vegan or vegetarian. But it said that switching to a plant-based diet could help.

Agriculture - together with forestry - accounts for about a quarter of global greenhouse gas emissions. Rearing livestock can also contribute to global warming via deforestation, as well as the methane animals produce.

Clare Oxborrow, a campaigner at Friends of the Earth, said eating less and better meat and dairy is a "crucial part of the fight against climate breakdown".

"Intensive livestock production is having a devastating impact in places such as the Amazon and Cerrado as forests are felled and habitats destroyed to clear land for grazing and animal feed.

"The meat and animal feed produced there is often imported into the UK."

Mrs Griffiths said she had been working with the sector to ensure "we do all we can" to reduce emissions, and said farming union NFU Cymru have more ambitious targets than her government.

But the minister, speaking on Sunday Politics Wales, said farmers felt like they were being given a hard-time.

"I think what we need to look at [is] the way meat is produced in Wales, for instance. It's very, very sustainable," she said, saying people can help reduce emissions by buying locally.

Earlier this year the Welsh Government, which has declared a climate emergency, agreed a target to cut carbon emissions by 95% by 2050 - although ministers said they want to go further and reach "net-zero".

The UK Committee on Climate Change had recommended 95% for Wales, and not net-zero, due to the importance of the farming industry to rural communities.