Russian Su-57s are in Syria and are continuing tests in real combat conditions | Eurasia Diary - ednews.net 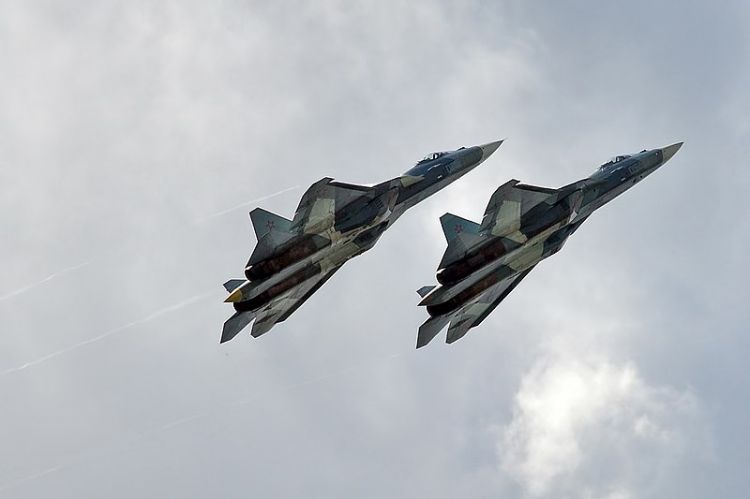 The Russian Su-57s are in Syria and continue to be tested in real combat conditions, learned BulgarianMilitary.com citing news agency Aviapro. According to Russian sources the fifth-generation fighters could be located on the territory of the Khmeimim airbase constantly and keep be tested in a real combat situation against jihadists.

This is possible thanks to the arrangement of the Russian military airfield with the construction of hangars, and experts pay attention to the fact that we can talk about a dozen or so fifth-generation combat aircraft, since the number of erected shelters allows this to be successfully implemented.

Analysts, in turn, note that at the moment Russia does not have a large number of fifth-generation fighters, however, one or maximum three Su-57 combat aircraft can constantly be in Syria.

“It is important to understand that all Su-57s built in Russia so far are pre-production. Without real testing in a combat situation, it makes no sense to establish the release of Su-57 fighters, and therefore it is logical to assume that these Russian aircraft can be in Syria not only for days, but also for weeks or even months, hiding from American reconnaissance spacecraft,” notes specialist.

It should be clarified that a few days earlier it became known that the Su-57 was again tested in a real combat situation, which, by the way, is possible only in Syria, but so far no confirmation has been received.

“In Syria, in combat, they tested the [helicopter] Mi-28NM, the pacifier Unmanned Aircraft in the strike version, and new types of missile and bomb weapons of the Su-57 fighter,” the Minister of Defense said, TASS reported then.

Shoigu also said that the Russian army tested 43 more new weapons in Syria. By March 316 samples of new weapons were tested, a total of 359 samples were tested in the country, the minister said, RIA Novosti reported.

At the end of December, it was reported that the fifth-generation Russian fighter Su-57 successfully passed the second phase of testing in Syria.