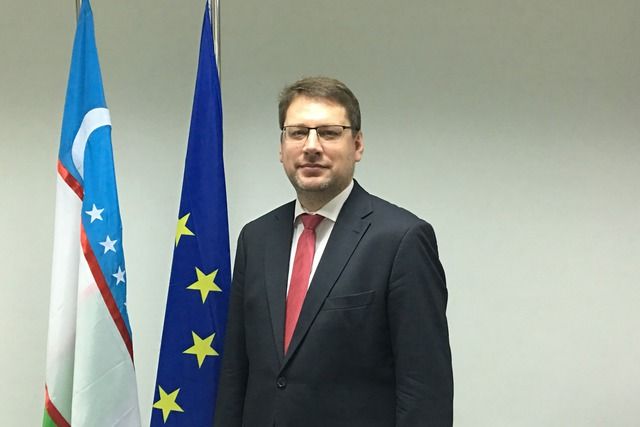 Uzbekistan is one of the key countries in the implementation of Europe Asia Connectivity Strategy, where there is a huge potential for private sector involvement, Ambassador of the European Union Delegation to Uzbekistan Eduards Stiprais told Trend in an interview.

"Firstly, this is the further development of transport routes, including towards China, but also towards South Asia. Therefore, the projects proposed by Uzbekistan, including those in Afghanistan, with access to the Indian Ocean, are extremely interesting for European economic operators. Secondly, this, of course, is the development of ITC networks in the region," said Eduards Stiprais.

Stiprais added, that Central Asia and Uzbekistan in particular is still deprived of the high-speed access to the global net, which is a backbone of the modern competitive economy.

"We are just about to complete our seven-year budget cycle in the European Union. From 2021, a new budget cycle will be launched. Now we are in very close collaboration with the colleagues from the government working on the future priorities that we want to reflect in terms of our cooperation for the next seven years," stated Stiprais.

According to the EU delegation ambassador, in a matter of weeks Uzbekistan and EU Delegation will finally have a clear picture in the main areas of cooperation for the next seven years.

"We are currently working seriously and hold negotiations of the EU-Uzbekistan Enhanced Partnership and Cooperation Agreement (EPCA). In addition, the EU side started to assess Uzbekistan’s application to participate in EU generalized scheme of preferences (GSP+) scheme," stated Stiprais.

According to the ambassador, EU Delegation and Uzbekistan are working on substantive content of the program of the visit of President of Uzbekistan Shavkat Mirziyoyev to Brussels and to European institutions in the near future.

Stiprais also stressed the importance of membership in the WTO for Uzbekistan.

"Firstly, membership in the WTO is essentially a 'certificate of maturity' for the economy and the administrative capacity of the country, which is extremely important for Uzbekistan in the process of attracting foreign investments, especially in the manufacturing sector, and creating jobs. Secondly, the process of joining the WTO itself is extremely important as a pedagogical exercise for the economic operators of Uzbekistan themselves in order to prepare them for the fierce competition that exists on the world market," said Stiprais.

The EU ambassador added that Uzbekistan and EU have good achievements in the ERASMUS + program, and the sides should continue expanding and deepening this direction.