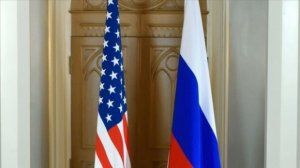 US President Joe Biden warned his Russian counterpart Wednesday that Moscow would face a robust response if it engaged in harmful activities, Anadolu Agency reports.

Biden was addressing around 1,000 US Air Force personnel and their families at RAF Mildenhall Military Base in Suffolk, England on his first visit abroad as president to attend the upcoming G7 Summit to be held in the British city of Cornwall.

He said the US will cooperate with Europe to overcome the toughest problems and the issues that are the most important for their future.

Noting that he will meet with Russian President Vladimir Putin as part of his contacts, Biden did not reveal any clues on the content of their meeting.

He underlined that the US is not after tensions with Russia and instead desires stable, predictable relations with the country.

He said he plans to tell his Russian counterpart that violating the sovereignty of democracy in the US, Europe and other places will have consequences.

Biden will meet with British Prime Minister Boris Johnson on June 10 and Queen Elizabeth II on June 13 before heading to Belgium’s capital.

On June 14, he will attend the NATO Summit in Brussels, where he will meet with his Turkish counterpart Recep Tayyip Erdogan.

Biden will also attend the US-EU Summit on June 15 in Brussels and meet with President Putin in Geneva, Switzerland the following day.