The “Three Brothers – 2021” exercises enhances the mutual confidence between the armies of Azerbaijan, Turkey and Pakistan - Expert
Read: 436

US, Europe, Russia, other areas worldwide grappling with massive fires 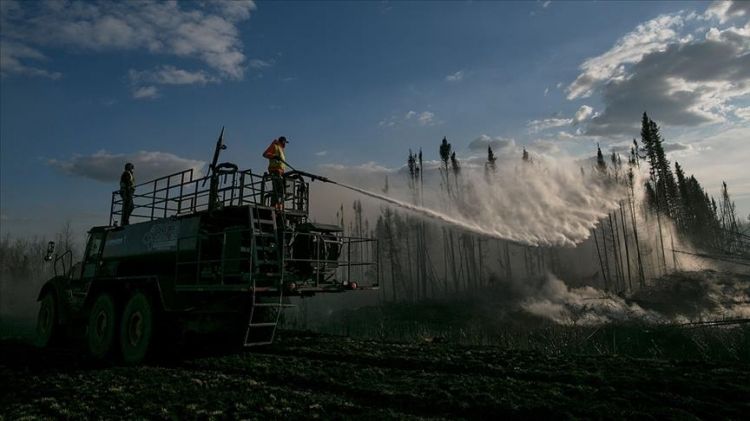 As fires continue to ravage many parts of the world, including the US, European Union countries, and Russia, the number of fires in 2021 so far has exceeded previous whole-year averages in many countries.
According to a satellite map by US space agency NASA’s Fire Information and Resource Management System, fires are burning in many parts of the world, turning many thousands of hectares into ashes.
The fires, represented by red on the map, have hit many regions from the US to Russia, from South America to North America, Central and Southern Africa as well as the Arabian Gulf, with many EU countries, including Italy, Greece, and Romania, also facing blazes.
According to an EU emergency map, fires of varying sizes blazing in different spots on the continent reach almost as far as northern Russia.
The map indicated that fires in all EU countries have been continuing for at least a week.
Italy grappling with fires
Especially southern parts of Italy have been suffering from multiple fires of various sizes, turning thousands of hectares on the islands of Sicily and Sardinia as well as parts of the Calabria region into ashes, local media reported.
At least 20,000 hectares have been destroyed in a fire that started on July 24 in Oristano in western Sardinia.
As many as 1,500 people have been evacuated from the area.
Italy had asked fellow EU countries for additional firefighting aircraft to combat the blaze.
Christian Solinas, president of the autonomous region of Sardinia, said calculating the damage from the fire is currently impossible and demanded urgent economic support from Rome.
- Romania
The southern region of Romania, also an EU member, including the capital Bucharest and regions near the Bulgarian border, is also shown in red on the fire map.
Fires in neighboring Moldova and Ukraine are also continuing.
- Greece
A fire that started on July 27 in Stamata in the Dionysos municipality, close to the capital Athens, spread to nearby residential areas.
Authorities of the Dionysos Municipality called the situation in the region severe, adding that the fire is approaching residential areas despite the efforts of firefighting teams.
- Russia
Efforts are still underway to extinguish forest fires which started this month in the northeastern Yakutia region.
Authorities declared a state of emergency for the region, where over 1.3 million hectares of forestland have gone up in flames.
Russia’s Ministry of Emergency Situations on Thursday reported that teams are working to extinguish the fires, which continue in 144 different locations.
- US and Canada
In the US, according to the Thursday data from the Interagency Fire Center, nearly 6.8 million acres of forest have burned in 82 blazes in 13 different states. Also, new blazes were reported in the states of Idaho, Alaska, and Minnesota.
In the US’ northern neighbor Canada, so far in 2021, 4,576 forest fires were reported. This amounts to 1,000 times more than the average rate of the last decade. A total of 2,150 hectares of forestland burned within a year.
- Not an average year
According to European Forest Fire Information System, European states this year exceeded the average number of forest fires reported annually between 2008 and 2020.
In Italy, so far in 2021, 53,797 hectares of forest burned, versus the average of the last 12 years of 40,781 hectares. In France, so far in 2021, 22,807 hectares of forest burned, topping the average of the last 12 years of 18,620 hectares. Likewise, in Romania, so far in 2021, 18,620 hectares of forest burned, versus the 2008-2020 average of 16,082 hectares.
Finaly, in Bosnia and Herzegovina so far in 2021 over 25,583 hectares of forest burned. This is close to 30,199 hectares, the whole-year average of the last 12 years.