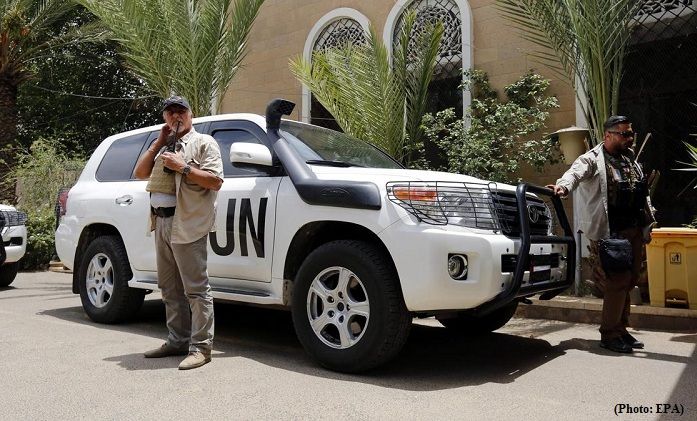 There can be little doubt that the overwhelming body of world opinion favours an end to Yemen’s long-running war, the cause of one of the worst humanitarian disasters of the modern era in which thousands of innocent civilians have died and many more suffered, The National reports.

There are even suggestions that Iran, whose military support for the Houthi rebels helped to cause the crisis in the first place, is growing weary of its involvement.

For all Tehran’s bluster about confronting the US and its allies in the region, the dramatic impact recent sanctions have had on the Iranian economy means that Tehran is no longer in a position to continue funding its overseas military adventures indefinitely.

Thus, at a time when the primary diplomatic focus of the world’s leading powers is to bring this dreadful conflict to an end, this month's announcement by the United Arab Emirates that it is undertaking a redeployment of its troops in Yemen should be seen as a significant step towards resolving the crisis.

The aim of the UAE’s new strategy, which Emirati officials say has been under active consideration for a year or so, is to change the emphasis of the coalition effort in Yemen from a “military-first strategy to a peace-first strategy”.

Consequently, the UAE is now in the process of reducing its force strength in Yemen.

The Emiratis’ action has prompted some Western critics to claim that the UAE’s action will undermine the effectiveness of the Saudi-led coalition in Yemen, and that it has caused a rift with Riyadh, which is responsible for overseeing the military campaign by a coalition of Sunni Muslim Arab states to restore the internationally-recognised government of President Abdrabu Mansur Hadi.

In fact, the reality is that Emirati officials only embarked on their redeployment following months of discussions with their Saudi allies and, rather than ending their involvement in the conflict, remain as committed as ever to achieving the coalition’s long-standing goals.

As a senior Emirati official informed reporters in Dubai, the drawdown “was not a last-minute decision”, but one that had been taken after extensive discussions with Riyadh. Moreover, the Emirati move needs to be seen in the context of the UN-sponsored Stockholm agreement negotiated between the warring parties last December, which set out a blueprint for ending the Yemeni conflict.

The UAE and the Arab coalition has supported this process from the beginning.

Concerns that the reduction in the number of Emirati troops operating in Yemen might weaken the coalition’s ability to confront Iranian-backed Houthi rebels also appear to be unfounded. In the past four years, the Emiratis have trained around 90,000 troops loyal to the Yemeni government, and Emirati officials are confident that they will able to fill the vacuum created by the Emiratis’ withdrawal.

As one senior Emirati official remarked, training the Yemeni forces has been “one of our major successes in Yemen.”

Far from undermining the effectiveness of the Saudi-led coalition, the UAE’s military redeployment, therefore, needs to be seen in a positive light, one where the focus is now overwhelmingly directed towards stabilising the situation and move towards a peaceful resolution, rather than allowing the conflict to continue.

That certainly seems to be the view of Martin Griffiths, the British diplomat serving as the United Nations Special Envoy in Yemen who is currently working to bring the peace process to fruition.

Moreover, Mr Griffiths’ efforts have taken on added importance because of the recent escalation in tensions in the Gulf region due to the stand-off between Tehran and Washington over its controversial nuclear programme.

While Iran has been accused of carrying out a number of attacks on oil tankers, the Houthis have been held responsible for a number of missile and drone attacks against targets in Saudi Arabia, including a civilian airport and an oil pipeline.

In addition, the Houthis have also been accused of committing an estimated 700 violations of the UN-sponsored Stockholm agreement since it first came into force last December.

But with the Emiratis now working towards a “peace-first strategy” in conjunction with the UN efforts to end the fighting, there is every prospect that the coalition’s original war aims will now be met, namely the restoration of Yemen’s internationally-recognised government.