The refusal of Kocharyan-Sargsyan blocs to recognize results of elections is tactical character - Expert
Read: 378

Friendship and brotherhood between Azerbaijan and Turkey nations are our greatest wealth - Parliament Speaker
Read: 252

Common understanding is impossible between US and Iran during presidency of Raeisi - Expert
Read: 208

We will continue to support Azerbaijan - Turkish President
Read: 199

Cooperation and security without dividing lines is a common goal of countries - Putin
Read: 188 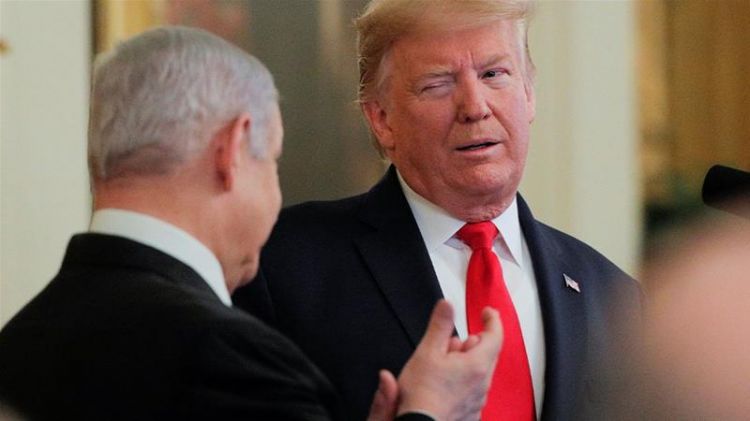 US President Donald Trump unveiled long-awaited “Deal of the Century” together with Israeli Prime Minister Benjamin Netanyahu in White House on January 28.

Donald Trump revealed his vision to the plan as win-win situation.

The international community reacted to this plan differently.

“I say to Trump and Netanyahu: Jerusalem is not for sale; all our rights are not for sale and are not for a bargain. And your deal, the conspiracy, will not pass,” Palestinian leader slammed the deal.

Yesterday, before releasing the deal, thousands marched in Gaza and the West Bank. The crowd chanted, “Trump is a fool, Palestine is not for sale!”

UN rejected Trump’s proposal and called a solution in the framework of UN resolutions and international law.

“The United Nations remains committed to supporting Palestinians and Israelis in resolving the conflict on the basis of United Nations resolutions, international law, and bilateral agreements and realizing the vision of two States – Israel and Palestine – living side by side in peace and security within recognized borders, on the basis of the pre-1967 lines,” UN added.

“France welcomes President Trump’s efforts and will study closely the peace program he has presented,” the French foreign ministry said.

German Foreign Ministry also issued a statement on Trump’s deal. Ministry vowed for the examination of the plan.

“Only a negotiated two-state solution that is acceptable to both parties can lead to a lasting peace between Israelis and Palestinians,” the ministry said in a statement.

Germany also noted that they will discuss it with other EU partners.

Egyptian Foreign Ministry commented on the deal and delivered its appreciation.

UAE mass media reported their support to Trump’s proposal. "The only way to guarantee a lasting solution is to reach an agreement between all concerned parties," Yousef al-Otaiba, the United Arab Emirates' ambassador to Washington said on Tuesday, Aljazeera reported.

Noting that, Saudi Arabia and other Gulf states have pledged to fund US President Donald Trump’s “Deal of the Century”

After the announcement of the deal, Turkey immediately condemned and stressed Jerusalem as a red line for Turkey.

"This is an annexation plan aiming at usurping Palestinian lands and killing the two-state solution," Ministry said, Anadolu reported.

"We will always stand by the brotherly people of Palestine. We will continue to work for an independent Palestine within Palestinian lands."

“Zionist regime is an occupier and the only solution to the crisis is holding a referendum among the main residents of the land,” he said, Mehr News reported.

"We will analyze it," Deputy Foreign Minister Mikhail Bogdanov said. He also added that Russia wants to hear Palestine’s approach.