We've seen hundreds of pictures sent by NASA's rovers over the years. We know how Mars' surface looks like, and it doesn't stop intriguing us. But now, for the first time ever, we also got some insight into the Red Planet's interior – and it comes with surprising details. 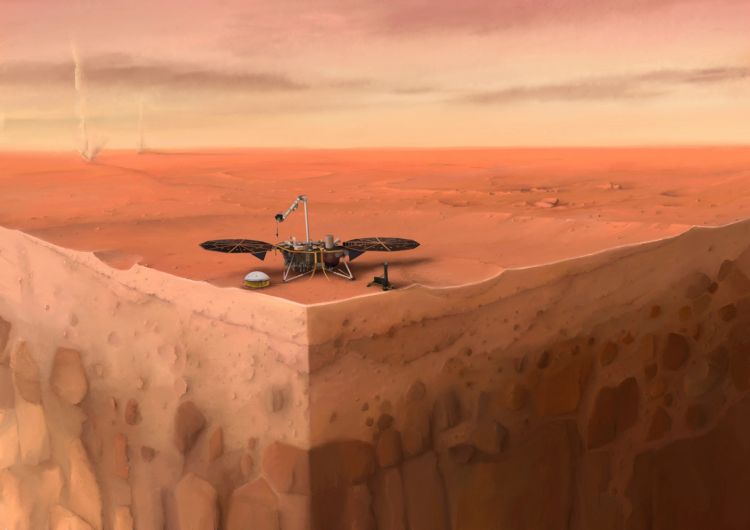 Prior to the arrival of NASA's InSight mission on Mars in 2018, rovers and orbiters exploring the Red Planet focused on its surface. However, the lander's seismometer has changed that, helping scientists create for the first time an interior map of another planet.
Using the seismometer on board the machine, scientists have discovered the depth and composition of Mars' crust, mantle, and core, as well as proof that the planet's core is actually molten. Called the Seismic Experiment for Interior Structure (SEIS), the tool has recorded so far 733 distinct marsquakes. Out of them, 35 (with magnitudes between 3.0 and 4.0) provided the data that helped the researchers shed some light on Mars' internal structure.
After analyzing the data recorded by InSight, scientists found that the alien world has a crust much thinner than predicted, and it may be composed out of another two or three sub-layers. If there are two sub-layers, the crust runs 12 miles (20 km) deep, but if there are three, it may go down for 23 miles (37 km). Under the crust, there is the mantle which stretches for 969 miles (1,560 km) below the surface. The last layer is Mars' core which has a radius of 1,137 miles (1,830 km).
What scientists have noticed is that all of the powerful quakes appear to have originated in Cerberus Fossae, a volcanically active zone where lava may have flowed within the last few million years. Surprisingly, nothing has been detected in major volcanic zones such as Tharsis, which is home to three of Mars' largest volcanoes. NASA says that these results are only the beginning and that the researchers are hopeful they'll detect a marsquake bigger than 4.0.
This is a giant leap for the agency. In only two years, it was able to map out the interior of another planet, which is incredible. To put it into perspective, it took scientists hundreds of years to map out Earth's core, and after the Apollo missions, it took them 40 years to measure the Moon's core.
The groundbreaking research was published in three distinct studies in the journal Science that focus on each layer of Mars' interior. On July 23rd at 9 a.m. PDT (12 p.m. EDT), the InSight scientists will present their findings in a livestreamed discussion on the agency's official channels, including NASA TV, NASA app, and other social media platforms.