Memory of two European Turks - "Forgive us my Martyr..." 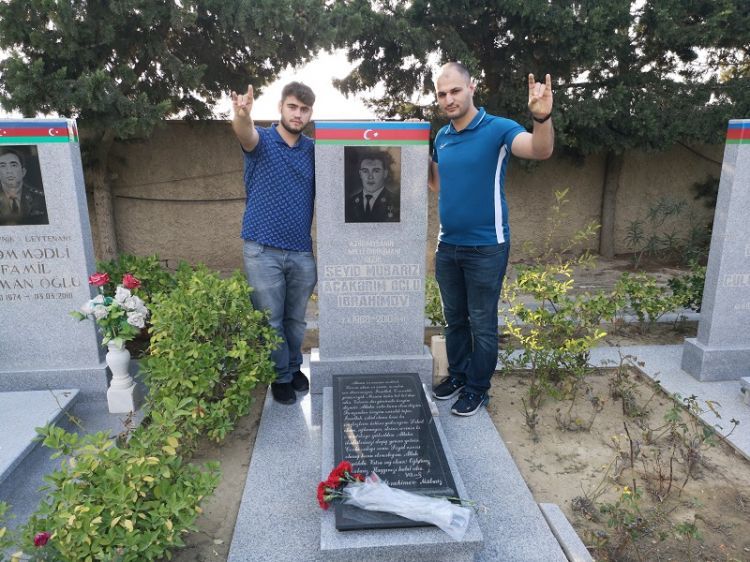 Today is the birthday of the national hero of Azerbaijan Mubariz Ibrahimov. With his heroism and bravery, Mubariz not only voiced his fame and real chivalry in  Azerbaijan but in the whole world. I witnessed it through my meeting with young men. Two men, citizens of Europe and far from this country traveled Baku to visit the honourable grave of Martyr Mubariz Ibrahimov ...

About three months ago, we had a chat with Umud Mirzayev in the yard near the office. Two young men approached us from the graves. They greeted and said, "We are looking for the Martyrs' graveyard." We recognised them to be of Turkish origin from their accents. We invited them in our office for some talks. We learnt that these men were two European Turks one named Eray and the other Hidayat. Eray was a citizen of Austria and Hidayat was a citizen of the Netherlands. Although they were originally Turks, they were born in Europe, but still had strong love for their own nation and Islamic beliefs.

I asked, what they were doing in Baku?

They said that they do not separate Azerbaijan from their homeland Turkey.

"We heard a brave man is sleeping in this land, the one fought the Armenians alone, and killed more than 100. We want to meet that hero, even though we could not see him, but at least we should visit his grave and recite "Fatiha" for his holy spirit."

Let's pay attention here that these are two Turks born and raised in Europe. The two European men, born in different countries of the continent, came a long way to visit the Martyrs Avenue searching for where he was born and buried...

Anyway, we took them to the Second Alley of Honour. We came to the grave of martyr Mubariz. We recited “Fatiha”. Our guest, Eray, asked what was written on the tomb. I answered his question that the last letter that Mubariz wrote to his parents before he died and was carved on the gravestone. They asked to interpret it for them:

“My souls, father and mother. Please do not miss me. If Allah will, we will meet in Paradise. Pray for me. My heart didn't allow me to stand still when my homeland was in a difficult situation. I have to do it for the sake of Allah. At least my heart would get calm. Until I die, I will go on enemies. If I die, do not cry. ”

Yes, the letter in fact doen't end here, but I was not able to read the rest of sentences afetr my eyes filled with tears...

Nevertheless...I had a very proud and emotional moment that day. Once again I was proud of my struggle, I was proud of my homeland. But I'm sorry too, because more than half of our people have no courage, no love of Mubariz, no love as much as  those two European Turks. If it were, we would now lay flowers at the statue of Mubariz in Shusha and Khankendi and visit the lands where he died.

Forgive us, as we could not follow your way...