Russian fighter jet shot down a US drone near Khmeimim air base in Syria
Read: 5748

Moscow explained why Turkey should not joke with Russia about Syria
Read: 450

His life carries spiritual and emotional resonance for all people, but especially for Jews in the Muslim world. 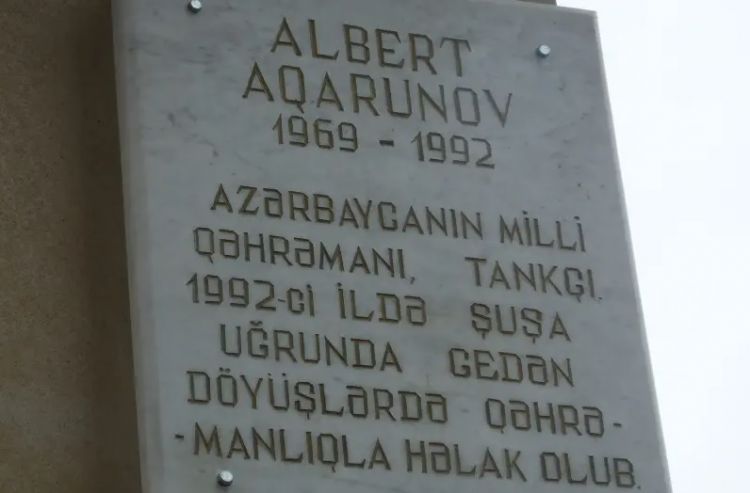 Half a year ago, a monument to the Jewish hero of Azerbaijan was unveiled in the capital of multicultural and tolerant Azerbaijan. The day was a particularly special day for the country’s Jewish community and for Jews worldwide who know the story of decorated war hero Albert Agarunov.

On that day in Baku, an enormous statue of Agarunov was unveiled with military honors before a crowd of government and community leaders and the broader community and foreign guests who had come to celebrate one of the greatest Azerbaijani-Jewish heroes.

Some traveled from afar to attend the ceremony, including Rabbi Abraham Cooper of the Simon Wiesenthal Center; Commissioner for the United States Commission on International Religious Freedom and President of Congress of Christian Leaders Rev. Johnnie Moore; Rabbi Shlomo Amar, former chief Sephardi rabbi; and several other rabbis from Europe, the US and Latin America, as well as state senators from the western US.

Killed at age 23, Agarunov lived a short but glorious and heroic life. He is loved and honored in Azerbaijan. He is a genuine hero and a model of the courage of our people. Azerbaijanis will always honor his memory. A brave tank officer, according to his friends, Agarunov was devoted to his country and was killed pushing his courage and determination to the limit.

He was born into a Mountain Jewish family in the village of Amirjan, near Baku. His family was originally from a famous Jewish village in Azerbaijan – Qirmizi Qasaba (Red Settlement) in Quba and had moved to Amirjan in search of a better life.

Agarunov began his military career in the Soviet army, but soon found himself wanting to give back to the country he loved and knew all his life. I think that most people in the world have never heard the name of this Jewish national hero from Azerbaijan, a secular Muslim country.

This Azerbaijani-Jewish hero went to extraordinary lengths to defend his tank battalion against an onslaught of Armenian tanks. He was a good friend, a renowned sharpshooter and a proud defender of his homeland. The unique story of his life is infused with great pride and respect for his country, a nation ingrained with an unparalleled standard of interfaith engagement, which continues to honor and celebrate Agarunov’s courage and heroism.

Agarunov died fighting on his tank for the city of Shusha. Twenty-eight years have passed since the Armed Forces of Armenia invaded and occupied Azerbaijan’s Shusha region. The fall of Shusha came as the last stage of Armenia’s military occupation of the Nagorno-Karabakh region – part of Azerbaijan’s historical and internationally recognized territory.

On May 8, 1992, with full support by the Russian 336th regiment, the Armenian troops managed to overpower Shusha. As a result of the occupation, Shusha city and 30 villages of the Shusha region were destroyed, 195 innocent civilians were killed, 165 were wounded and 58 persons remain missing. More than 24,000 inhabitants of Shusha were subjected to ethnic cleansing, becoming internally displaced people.

Shusha city was one of the ancient and historical cradles of Azerbaijani culture, with its rich cultural monuments, famous artists and thinkers – Uzeyir Hajibeyov and Rashid Behbudov, Khurshidbanu Natavan and Molla Panah Vagif, Khan Shushinsky and Farhad Badalbeyli, Jabbar Garyagdy and Niazi, Bulbul and Samad bey Mehmandarov. They were born into an impregnable fortress, and, as pure mountain streams flowed through the valleys and expanses of Azerbaijan, built and created beauty. Whether in the fields of music, arts, architecture, literature or others, Shusha was a jewel of Azerbaijan, a source of pride and a cultural center.

In the framework of Armenia’s deliberate policy of destruction, plundering, desecration and embezzlement of cultural and religious heritage of Azerbaijan in the occupied lands – in Shusha alone there were more than 170 buildings with the status of architectural monument – 160 cultural and historical monuments, mosques and rare manuscripts have been destroyed.

THE NIGHT of May 8-9, 1992 was dark and cold. There was no sign of a military attack. It was past midnight when intelligence reported an offensive movement by the Armenians. However, no one was expecting a large-scale offensive. That night many valiant sons of Azerbaijan died. They died defending Shusha, the pearl of Azerbaijan and bastion of national culture. Jewish hero Agarunov, a 23-year-old tank commander, was among those who sacrificed their lives.

Agarunov was one of the Armenian army’s biggest targets. The invaders were so especially offended by his strong military skills, coupled with his identity as a Jew, that they placed a bounty of 5 million rubles on his head. Agarunov fought with all of his heart and might as he and many Jewish soldiers faced the Armenian invasion and subsequent acts of ethnic cleansing and brutality against more than 20% of Azerbaijan.

With the option to repatriate for Israel, Agarunov and his fellow Azerbaijani Jews chose to fight to defend their homeland of Azerbaijan. A truly righteous man, Agarunov lost his life when a sniper bullet caught the seemingly uncatchable hero, because Agarunov had left the security of his tank, exposed to the enemy, instructing the tank driver to avoid driving over the many murdered bodies of his Azerbaijan soldiers on the ground. Agarunov lost his life because he was busy honoring the lives of his compatriots, unwilling to put even his own safety before the integrity of their memory.

His life carries spiritual and emotional resonance for all people, but especially for Jews in the Muslim world. The meaning and depth of his identity was only realized because he was born and raised in a place where interreligious harmony became an expected component of life. Agarunov fought for his homeland Azerbaijan, because for thousands of years and all the right reasons, his homeland fought for him.

Albert Agarunov was a war hero, an icon of Jewish life and commitment who was not only accepted in a majority-Muslim nation, but also widely cherished by all faiths. When taking in the story of Agarunov’s life, like any historic event, one can easily see that the beginning is as meaningful as the end. Shusha never forgot its own Azerbaijani heritage and the Azerbaijani people will not forget this beautiful and historical city – Shusha!

The article was originally published in The Jerusalem Post