Azerbaijanis hold protest in front of the UN HQ in Switzerland 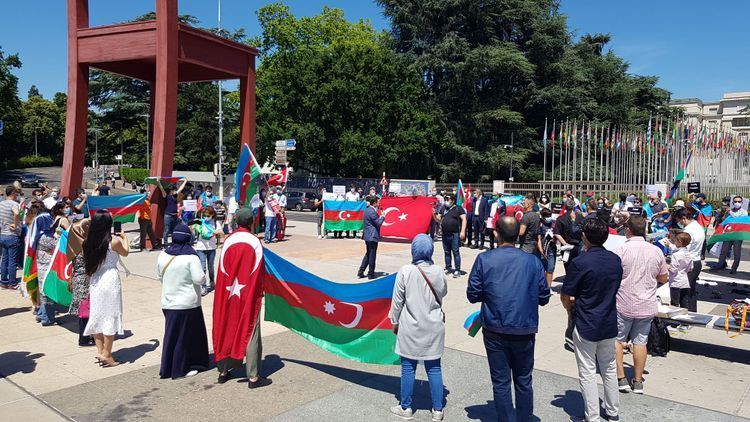 A protest rally has been held in front of UN Headquarters in Geneva against the next military provocation of Armenian armed forces in the direction of Tovuz region of Azerbaijan, State Committee on Work with the Diaspora told, EDNews.net reports citing APA. The speakers expressed confidence that independent Azerbaijan, which is peaceful, respects the norms of international law and attaches great importance to human values, will stand strong in every test, and Nagorno Garabagh will definitely be liberated from Armenian occupation.

“As Turkish nation, we will continue to stand by our Azerbaijani brothers, as we have done so far. We declare this to the whole world once again in front of the UN building,” Murat Shahin said.

Those who delivered speeches called on the UN to organize a mission to investigate the provocations and attacks of Armenia, and the world community to take measures against the occupier Armenia.

Slogans as “Justice for Azerbaijan”, “Nagorno Garabagh is the land of Azerbaijan”, “Stop Armenian occupation” were chanted in the rally where the state flags of Azerbaijan and Turkey were waved and posters protesting against Armenia's aggressive policy were raised.