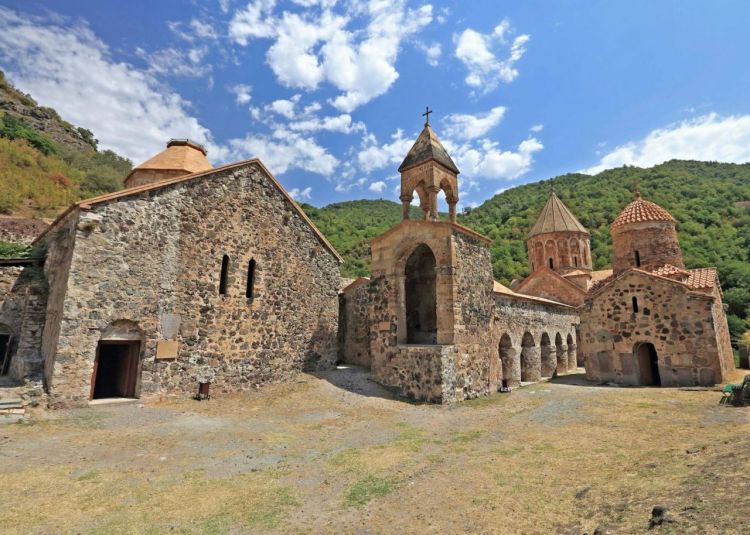 An Azerbaijani historian has said that all traces related to the Khudavang monastery in Kalbajar region show that it doesn’t belong to the Armenians.

Historian Elnur Kalbizade, head of the Caucasus policy department at the Institute of Caucasian Studies under the Azerbaijani National Academy of Sciences, said that that the Armenians themselves were behind a major falsification related to the Khudavang monastery, which belongs to the Christian Albanians and played an important role in the ethnogenesis of the Azerbaijani people, Trend reported.

“First of all, it should be noted that a temple was also here back in the pre-Christian period. Specially-built monuments which were discovered by the Armenians in 2007 during the excavations they carried out on the monastery’s territory, testify to this. Then the Armenians themselves admitted that such monuments are not typical for Armenian Christianity,” he said.

The historian added that this was not the only falsification by the Armenians.

“On the other hand, the Armenians committed another falsification, linking the name of the monastery allegedly with the Armenian word 'khota', which means 'elevation', 'hill'. In fact, the name of the monastery ‘Khudavang’, in the pre-Christian period ‘Khuda/Gudai’ word was used in the area of ​​Turan (an ancient region in Central Asia) and Iran in the meaning of 'Almighty, Creator'," he added.

Kalbizade stressed the fact that the largest structure of the monastery in the 13th century is associated with the name of the ruler Arzu-Khatun, whose father’s name was Gurd, and this also should not be considered accidental.

According to him, since 2004, the Armenians, at the expense of the US businesswoman of Armenian descent Adel Hovnanian, began to carry out falsification work in the monastery.

"The bell, shown on the video we have seen was hanged in 2005 and has no historical value. The Armenians, who then carried out the falsifications, invited Italian specialists in 2017 in order to restore some inscriptions and present them as ‘ancient’. In fact, they were buried by the Armenians some time ago," added the historian.

Armenians, who have to move out from Kalbajar by November 25, are burning houses and forests, as well as damaging historical monuments. They also started to demolish the Khudavang monastery in the Kalbajar region and transport its valuables to Armenia.

Note, Khudavang monastery was built in the IX-XIII centuries in Kalbajar by the wife of the Albanian prince Vakhtang. After the occupation by the Armenian armed forces in 1992, they falsified the monastery, violating the 1954 Hague Convention.