Armenia's position does not adhere to the peace - The IEPF President | Eurasia Diary - ednews.net

Armenia's position does not adhere to the peace - The IEPF President

Today, a group of civil society organisations operating in the war-torn regions of Azerbaijan filed a petition against Armenia on the world-famous website www.change.org in the office of the International Eurasia Press Fund. The petition calls for protest against the nearly thirty-year occupation of Nagorno-Karabakh and surrounding regions of Azerbaijan, as well as the seriously mining of the territories by Armenian troops after their withdrawal and their refusal to provide maps of those mined areas.

Speaking at the event, President of the International Eurasia Press Fund Umud Mirzayev said that the landmine problem remains the biggest problem after Armenia signed a capitulation act on November 9.

“There is a lot of land pollution in the liberated territories. As you know, both after the First and Second Karabakh Wars, and for a period of 30 years in general, the territory of Karabakh and seven adjacent regions has been heavily mined. In addition to the destruction, devastation, looting, arson, and environmental terror, these areas have been mined in every inch of it and contaminated with large quantities of banned munitions. In this regard, on March 25, five civil society organisations gathered in this audience and appealed to the world powers and international organisations to influence Armenia in the handover of the mine maps to Azerbaijan. 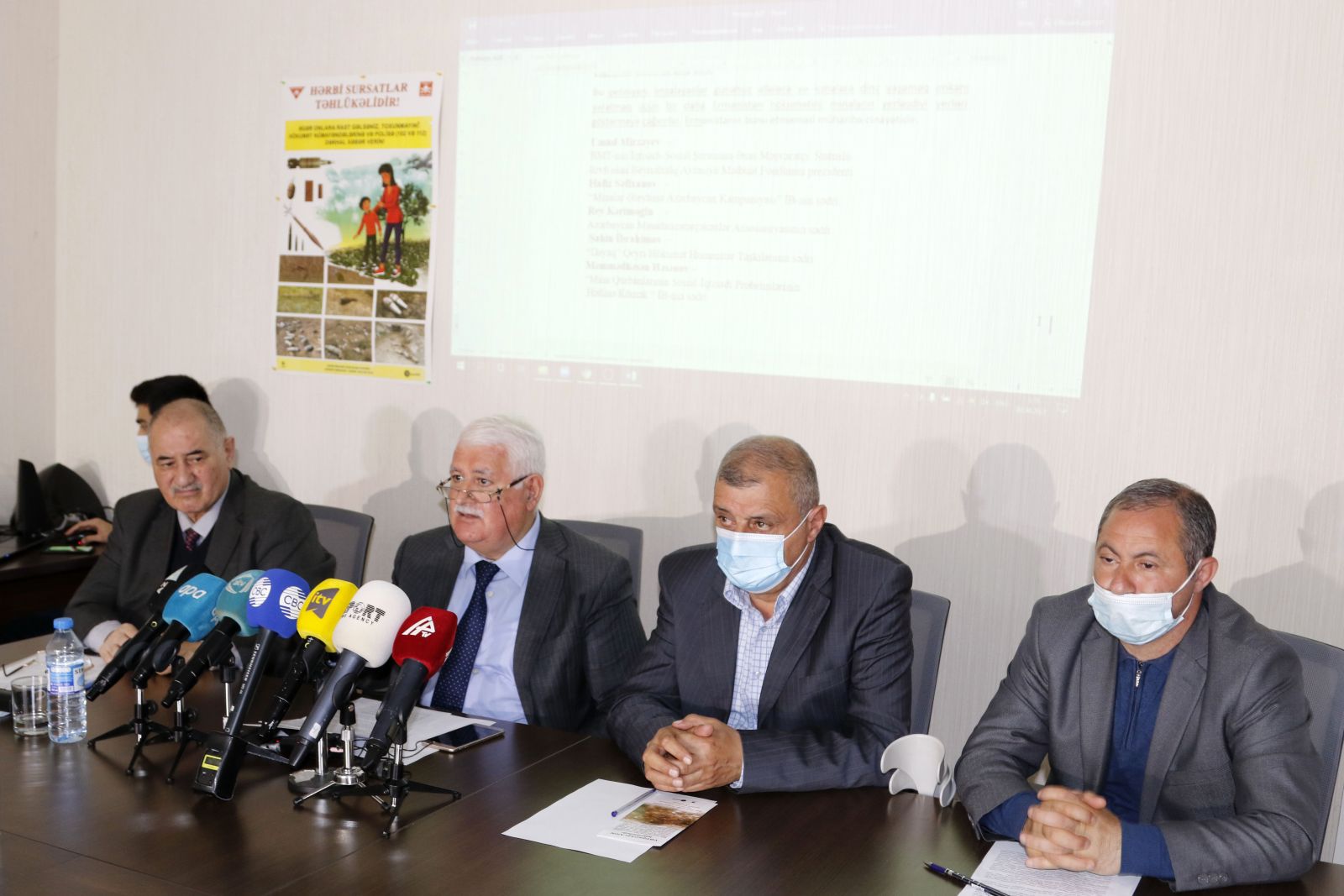 According to U.Mirzayev, the Armenian side had to submit a map of the mined areas immediately after the capitulation.

“However, the map has not been given to the Azerbaijani side yet. However, the President of Azerbaijan, as well as the Minister of Foreign Affairs, said that the provision of these maps to Azerbaijan is very important for the restoration of peace and security in the region."

The IEPF President noted that the issues that Pashinyan raised during his meeting with the Russian President yesterday did not adhere to the peace.

“He did not say a word about the maps. On the contrary, the issue he raised was related to terrorists and separatists in Azerbaijan.

According to Shahin Ibrahimov, chairman of "Dayaq" the NGHO in Azerbaijan, it is no longer a secret that mines are the biggest problem in Azerbaijan today.

"Failure in submitting the mine maps by Armenian side is delaying the process of clearing mines, implementing infrastructure projects and returning the IDPs who have been longing for land for 30 years. Our goal in signing the petition is obviously to get a map of the mined areas. Another goal is to live in peace and coexistence. The sooner these maps are issued, the sooner Azerbaijan, Armenia and then Georgia join the process, and then our place would be a mine-free part of the world." 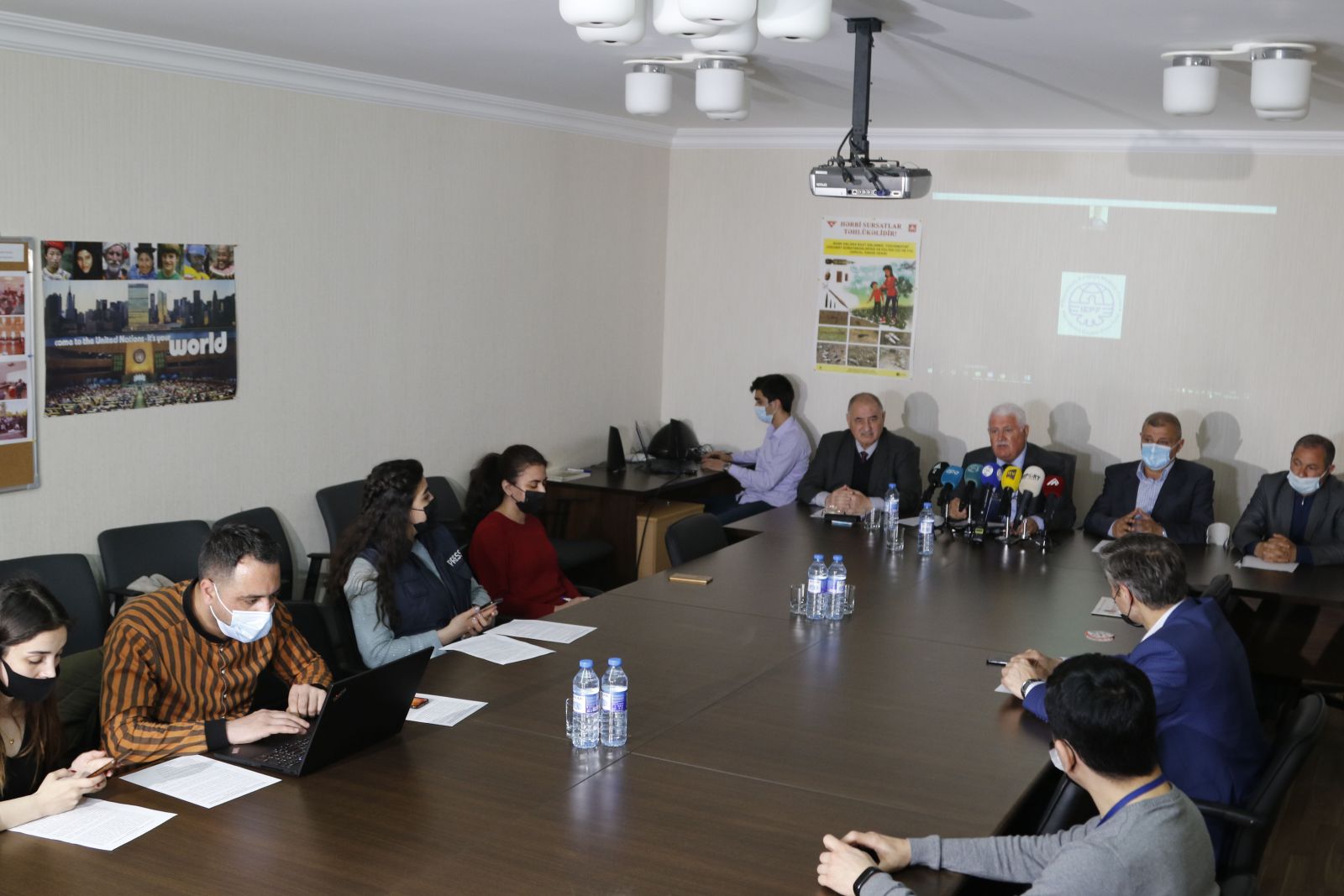 Mammadhasan Hasanov, chairman of the "Assistance in Solving the Socio-Economic Problems of Mine Victims" Public Union, noted that during the war, Armenia obstructed us with provocative actions.

"We saw that mines were scattered around. During a visit to the liberated areas, we witnessed a military ambulance moving very fast while laying roadside billboards. Three servicemen had fallien into a mine and lost their legs. In Aghdam, the front of a 'Shagman' lorry driven by a civilian was hit by an anti-tank mine. The driver was seriously injured, but fortunately survived. All this shows that the threat of landmines still exist over there. We appealed to five organisations to urge Armenia to return the maps to the Azerbaijani side so we can get rid of the mine disaster.

After their speeches the NGO leaders answered journalists' questions.