They will also visit Kiev on Tuesday, Dmitry Kuleba noted 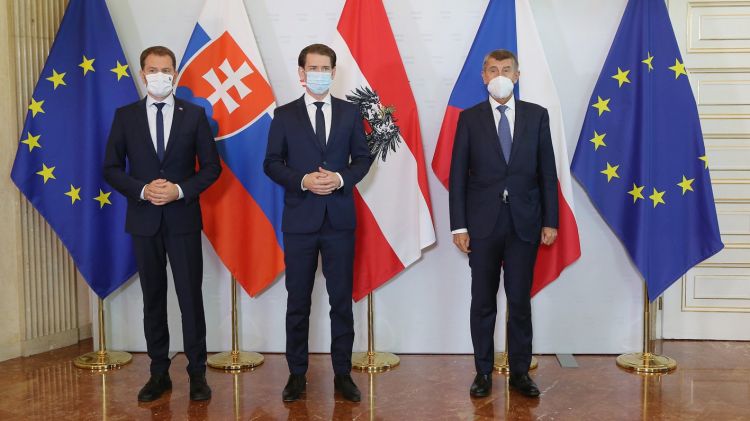 Foreign Ministers Alexander Schallenberg of Austria, Ivan Korcok of Slovakia and Jan Lipavsky of the Czech Republic have arrived at the part of the Lugansk Region controlled by Kiev, Ukrainian top diplomat Dmitry Kuleba said on Monday.
"My counterparts from Austria, Slovakia and the Czech Republic are now in the Stanytsa Luganskaya (a village near the line of contact in the Lugansk Region)," the minister noted. According to Kuleba, the foreign ministers can "look at the consequences of Russian aggression and Ukraine’s efforts to overcome them."
The Ukrainian top diplomat said his counterparts would also visit Kiev on Tuesday.
Kuleba recalled that German Foreign Minister Annalena Baerbock was going to arrive in Kiev on Monday and then travel to Donbass on Tuesday. Furthermore, French President Emmanuel Macron will pay a working visit to Ukraine on Tuesday to meet with his Ukrainian counterpart Vladimir Zelensky. "This is going to be the first visit of the French leader to Ukraine over the past 24 years," the top diplomat emphasized. He said that French Foreign Minister Jean-Yves Le Drian also will fly to Kiev jointly with Macron. This week, Chairman of the Verkhovna Rada Ruslan Stefanchuk will meet with his Estonian colleague in Kiev, while Ukrainian Prime Minister Denis Shmygal will hold talks with the head of the Lithuanian government.
The foreign minister believes that numerous visits of Western diplomats and high delegations to Kiev can contribute to hindering Russia. "Intensive diplomacy makes it possible to keep the situation [on the Russian-Ukrainian border] under control. Kiev has become a center of attention for international diplomacy, and this also deters Russia," Kuleba noted. In his opinion, the Ukrainian authorities "are making every effort to maintain peace and make Moscow de-escalate and withdraw troops," which, according to the top diplomat, were "deployed near the border without any reason."
Concerns over Moscow’s alleged preparations for an invasion of Ukraine have been increasingly announced in the West and in Kiev recently. Kremlin Spokesman Dmitry Peskov castigated these statements as an empty and groundless escalation of tension, emphasizing that Russia posed no threat to anyone.