Putin cracks down on media, free speech in Russia - ednews.net

Putin cracks down on media, free speech in Russia

President Vladimir Putin has launched a new front, unveiling a repressive campaign targeting his own people. Tightening the screws, clamping down on critics, cutting off what oxygen exists in Russia’s so-called “managed democracy. 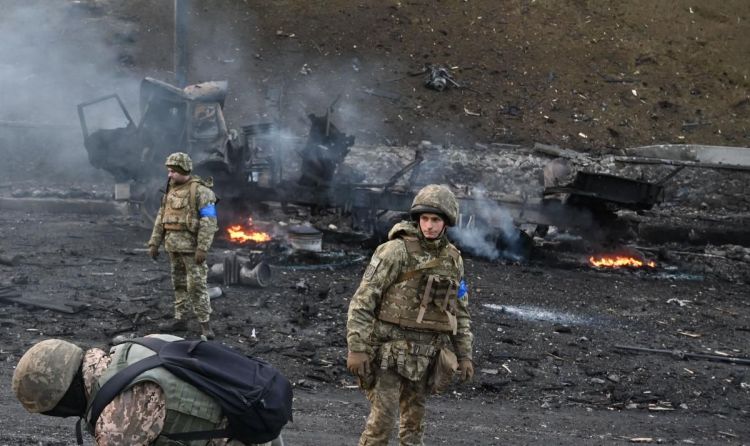 The sun was shining over the Russian capital Saturday, but there was a bitter chill in the air.
Three days into the military invasion of Ukraine, with dissent and disbelief on the lips and minds of many Russians, President Vladimir Putin has launched a new front, unveiling a repressive campaign targeting his own people.
Tightening the screws, clamping down on critics, cutting off what oxygen exists in Russia’s so-called “managed democracy.”
With the isolating sanctions and the shunning by the west, authorities here look to be making a sharp and troubling inward turn.
“It is an excellent opportunity to revive several important institutions to prevent particularly grave crimes — like the death penalty for the most dangerous criminals,” Dmitry Medvedev, the Russian president when Putin stepped aside for four years to respect constitutional term limits, wrote Saturday.
The deputy chair of the country’s National Security Council was responding to the wave of expulsions from world bodies — particularly the Council of Europe — but he took a mocking tone in addressing the world’s condemnation over Russian aggression. He pointed out that both the United States and China have yet to outlaw capital punishment, and are in no place to lecture Moscow.
The real irony was that Medvedev took to Facebook to make his point. In the social-media age, the first indications of the crackdown underway came in Russians’ Saturday morning scroll.
Twitter was impossibly slow to load, but that wasn’t entirely strange. The service has been sluggish for a year now owing to a spat with the country’s communications and media regulator about the removal of content, at least some of it expressing support for jailed opposition leader Alexei Navalny.
But Facebook was affected too, a tit-for-tat measure taken after the U.S. firm prohibited Russian state-run media outlets from advertising on the site or using their content to make money.
This step, said Roskomnadzor, the regulator, was judged by the Russian Prosecutor General and Foreign Ministry to violate “fundamental human rights and freedoms, as well as the rights and freedoms of Russian citizens.”
A deliberate slowing down of the site was the penalty for such a breach.
A battle over bandwidth may sound frivolous when human lives are being snuffed out in the assault beyond Russia’s western border. But there are not-so-subtle hints that a more serious squeeze lies ahead.
OVD-Info, a Moscow-based organization that tracks arrests linked to anti-government activities across the country, said that at least 2,776 people have been arrested for protesting in the three days since the war began.
But the news was reported not on the group’s website, which was inaccessible to Russians Saturday night, but on its Telegram channel, which has been unaffected by government restrictions and has experienced a panicked sort of migration of information-hungry Russians in the last 24 hours.
In a separate statement Saturday, Roskomnadzor announced an investigation into the reporting of numerous media organizations over their accounts of the Russian invasion of Ukraine and the language used to describe the offensive.
The outlets are accused of publishing “untrue information about the shelling of Ukrainian cities and the death of civilians in Ukraine as a result of the actions of the Russian army, as well as materials in which the ongoing operation is called an attack, invasion or a declaration of war,” the statement said.
An attack on words after an attack on Ukraine.
Novaya Gazeta, one of ten targeted media companies, wrote about the investigation cleverly but carefully, saying it was being forced to “remove materials where what is happening in Ukraine was called a ‘war.’”
On Thursday, several hours after the invasion of Ukraine began, Roskomnadzor, warning the media that they were “obliged to use information and data obtained only from Russian sources.”
Such Second-World-War-style censorship might seem appropriate to Putin who has claimed the attack was necessary to rid Ukraine of “neo-Nazis” and to save the Russian-speaking population of the Donbas region in eastern Ukraine from “a genocide.”
But not to Novaya Gazeta, whose editor-in-chief, Dmitry Muratov, was a co-recipient of the Nobel Peace Prize.
On Saturday, the paper issued a defiant statement — and on Twitter, of all platforms.
“Roskomnadzor demanded we remove our materials, forbidding us to call the war a war. Otherwise our site would be blocked. We will continue to do honest journalism. Novaya Gazeta is against the war.”
Meduza, another online news site threatened with a fine or blocking, published lengthy instructions on how to “prepare for life in the new Internet reality” of online government censorship, predicting there was a “high probability” that Putin’s crackdown on the media and free speech in Russia would intensify.
“We assume that in the near future they may begin blocking independent media (and not only).”
Facing economic isolation, travel bans and now restrictions on what they can say and hear and read, some Russians feel they are being held hostage to the actions of a man—Putin—who, in a purported desire for security and stability, has cast their country in shame.
They are bracing for worse to come, and that may be a wise decision. The Russian leadership has yet to show any signs of backing down.
“No change will be made to the decision on the military operation in Donbas,” said Medvedev, the former president, in his Facebook post.
“It will be carried out in full, until all the results that the Russian president had set are achieved.”