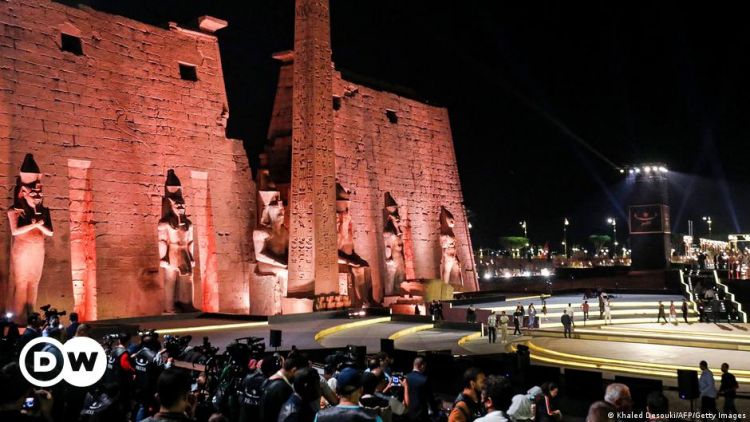 Luxor's Avenue of Sphinxes finally opened as a tourist attraction on Thursday in a ceremony filled with pomp, glitz and star appearances.
The two-hour affair featured an appearance by Egyptian President Abdel Fattah El Sisi, before a documentary about the site was shown and thousands of dancers, musicians and actors paraded down the 2.7 kilometre, 3,000-year-old avenue from Karnak Temple to Luxor Temple.
The televised event had few live spectators, who gathered with Mr El Sisi at the courtyard of the Luxor Temple to watch live performances, something people would have done in Ancient Egypt, Dr Khaled El Enany, the Minister of Tourism and Antiquities, told the crowd.
The ceremony to inaugurate the area was part of a series of high-profile investments in Egypt’s historical sites, designed to attract tourists and revive a sector struggling to bounce back from the Covid-19 pandemic.
Years of painstaking restoration work led to Thursday’s celebration. Many believed the project, considered a white elephant for more than 70 years since the first stone sphinx was found on site in 1949, would never come to fruition.
Throughout the evening, which was designed to replicate ancient celebrations of the autumn festival Opet, there were messages of thanks to Mr El Sisi and the government for the investment in the site and in Egypt’s tourism and heritage.
The Parade of Mummies through Cairo in April drew millions of viewers around the world, but the smaller ceremony in Luxor looked unlikely to have the same effect.
The ancient walkway, variously known as the Avenue of Sphinxes, the Way of the Rams and the Path of the Gods, is in what was the city of Thebes, Egypt’s capital in antiquity.
It is believed to have been the path that pilgrims trod to visit the temples and pay tribute to their deities.
Some streets in the city were completely cleared for the event, particularly around both temples. Perimeters were set up along the length of the avenue on both sides, with hundreds of security officials throughout the city.
Egyptian officials had been told not to reveal any details about the spectacle to keep it a surprise to viewers, and the avenue was hidden from view by grey street hoardings before the show began.
Mr El Sisi featured prominently in the celebration, arriving with his wife Entissar Amer in a black car driven slowly up the avenue.
After being greeted by a group of blue-clad schoolchildren, he toured the Luxor temple site guided by Dr El Enany.
Later, thousands of actors, dancers and drummers walked in time to musical performances against the inviting backdrop of both temples.
Three golden, pharaonic-style model boats dedicated to the ancient sun god Amun Ra, moon god Khonsu and mother goddess Mut, were carried by men in sheer gold and black robes, replicas of what would have been worn for the same festival in ancient Egypt.