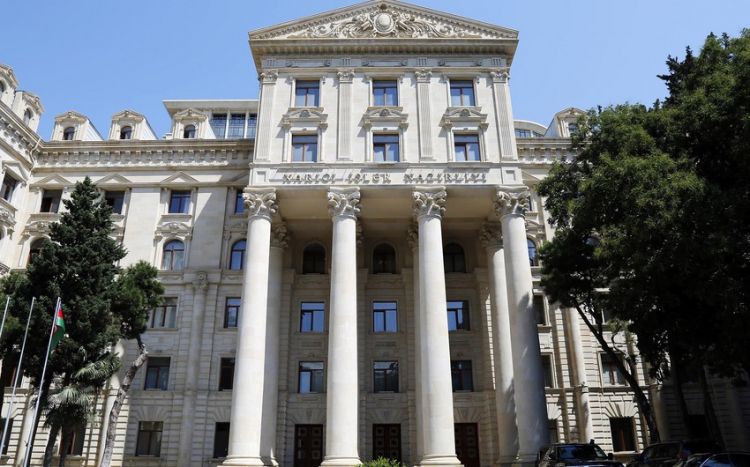 "Groundless claims, as well as accusations far from reality on the humanitarian issues, which were sounded by Armenian Prime Minister against Azerbaijan while his speech at Clingendael - the Netherlands Institute of International Relations, show that Armenian leadership is far from sincerity in the issue of normalization of relations between two states," said Head of Press Service of the Ministry of Foreign Affairs Leyla Abdullayeva while commenting on the opinions of Armenian Prime Minister Nikol Pashinyan during his speech at Netherlands Institute of International Relations, Ednews reports.

"First of all, we remind that when Azerbaijan liberated its territories from occupation and brought mine problem in these lands, as well as the Armenian side's purposefully planting mines systematically during the occupation period of about 30 years and withdrawing from the areas after signing the trilateral statement, the mines' causing serious threat for lives of people in the region and so the issue of pressing on Armenia regarding provision of Azerbaijan with landmine maps to the world community, firstly the Armenian side denied presence of landmine maps. Then, facing the position of the world community on the issue, Armenia provided Azerbaijan with landmine maps in parts and accuracy of the provided maps was 25%. In general, describing provision of landmine maps by the Armenian side as a humanitarian gesture is wrong, because it was Armenia's international humanitarian legal obligation after signing the trilateral statement," noted Leyla Abdullayeva.

MFA Spokesperson has noted that 219 people, majority of whom were civilians, have been victim of mine incidents from signing the trilateral statement until today: "Unfortunately, our citizens regularly become vixtims of mine after provision of landmine maps by the Armenian side, as well as Brussels meeting of leaders of two states. 10 persons have been injured due to mines as a result of 9 incidents in only April of this year.

Now, Azerbaijan is reconstructing, and restoring the territories, destroyed by Armenia over about 30 years. Work is underway day and night to provide a return of people, who were expelled from their lands for decades, to their homes. However, large-scale mine problem in these territories causes a serious threat to the quick return of IDPs to their homes. Its only reason is Armenia's occupying policy and destroying, violating activity for 30 years.

Undoubtedly, humanitarian issues make up an important part of the peace agenda and due to this reason, Azerbaijan has always been guided by humanitarian principles in its activity, even during the 44-day war, and has taken humanitarian steps after the war unilaterally. However, the Armenian side should understand at last that not only speaking but also taking an action is necessary for peace.

However, Armenian PM's speech with still groundless claims against Azerbaijan put the country's willingness to take an action for peace under a serious question."