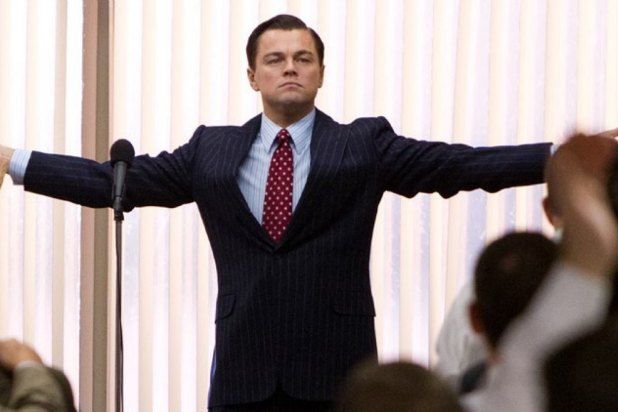 The man has one of most diverse IMDb pages of any working actor, with roles ranging from his Titanic heartthrob to his unstable undercover cop in The Departed to his frontiersman fighting for survival in The Revenant. He’s proven to be a versatile actor who can play just about any type of character imaginable.

But he also happens to have a knack for portraying folks with too much money and too little perspective on what their wealth has done to them morally. That was the case for his villainous Calvin Candie (who was deeply racist, wealth notwithstanding) in Django Unchained, tortured Jay Gatsby in The Great Gatsby and awful Wall Street tycoon Jordan Belfort in The Wolf of Wall Street.

That last performance in particular is arguably the best of DiCaprio’s career, as he got a chance to fully embody a deplorable human being from the beginning of his terribleness to his reign’s bitter end. He should have won the 2014 Best Actor Oscar for that role, which would’ve ended the “Leo Will Never Win an Oscar” narrative two years before he finally won the coveted statue.

For the record, that sentiment is by no means meant to take away from Matthew McConaughey’s impressive and Oscar-winning work in Dallas Buyers’ Club. He isn’t an unworthy Oscar winner. It just so happens that he went up against DiCaprio’s best performance, which in retrospect slightly taints his win. That decision by the Academy wasn’t alright, alright, alright.

When the film begins, DiCaprio’s Jordan is a wide-eyed Wall Street pup internalizing terrible life advice from, ironically, McConaughey’s Mark Hanna. Look at how uncomfortable he is with Mark’s lifestyle and the chest-beating thing he does in a crowded restaurant. This is an important growth marker for what Jordan eventually becomes, which DiCaprio expertly lays down.

He quickly morphs into a money-hungry jackass who earns the FBI’s attention for his shady business practices. Check out this fantastic scene between DiCaprio and Kyle Chandler’s FBI agent where their pleasant conversation quickly transitions into Chandler calling him on his BS and DiCaprio not-so-politely kicking him off his boat. That level of smarminess is hard to pull off, and DiCaprio nails it.

Then there’s the Quaalude scene, where the aged drugs take away all of Jordan’s body control. He’s forced to wriggle his way from a lobby payphone into his car parked out front. It’s a showcase of physical acting that we don’t often see from DiCaprio, and it’s arguably more impressive than any of his injured wilderness crawling in The Revenant.

All Oscar performances need a signature monologue, and DiCaprio’s comes during his “retirement” speech where he realizes half-way through that he has no intention of leaving his firm. The way he riles the room up is next-level stuff, especially because almost every word out of his mouth is simultaneously genuine and deceptive. This alone could have been his Oscar reel.

There’s more than enough available evidence to make it clear DiCaprio was robbed of an Oscar for The Wolf of Wall Street. But it’s also fun to think about how Oscar history might have changed for the better if the Academy had made the right decision in 2014. There’s a potential world where DiCaprio winning his Oscar at the current time changes the Oscar fates of two other actors.

In 2015, Eddie Redmayne won the Best Actor Oscar for portraying Stephen Hawking in The Theory of Everything that should have gone to Michael Keaton for his standout performance in Birdman. Redmayne did some noteworthy physical acting to play Hawking, but nothing he did matched up to Keaton’s bombastic, desperate washed-up actor trying to stage a comeback.

So let’s say that DiCaprio wins his Oscar in 2014 and the Academy also made the right call in 2015 by awarding Keaton his much-deserved statue. Redmayne still easily could have won in 2016 for his career-best performance as a transgender woman in The Danish Girl, which the Academy might have felt compelled to give him if they weren’t so concerned with rewarding DiCaprio for the first time.

Regardless of the butterfly effect DiCaprio rightfully receiving his Oscar for The Wolf of Wall Street might have created, it doesn’t change the fact that his performance as Jordan Belfort remains the best of his illustrious career and he should have received the 2014 Oscar for his work.

He must have felt so jilted after losing yet another Oscar that he finally snapped and took a role that required sleeping in a horse carcass. It earned him his Oscar, but maybe he could have saved himself the trouble..