There is a role of third power in Keshikchidag case - Chairman of the Center for Analysis of International Relations Farid Shafiyev | Eurasia Diary - ednews.net

"We do not see any compromise atmosphere in Armenia, Armenian community in Nagorno-Karabakh" 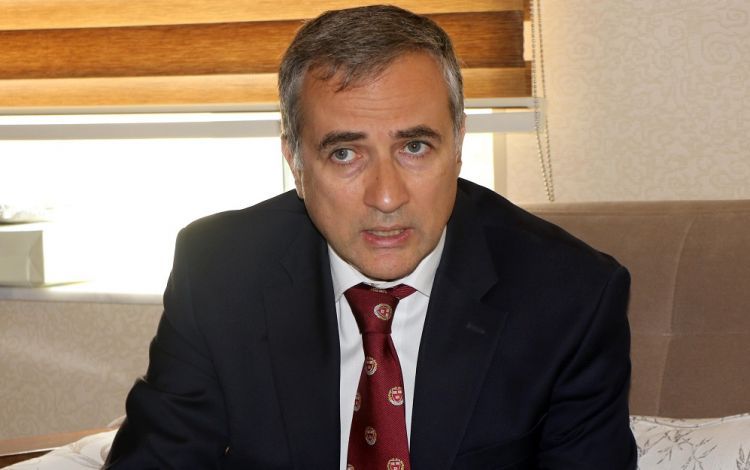 As we reported before, Chairman of the Center for Analysis of International Relations (CAIR) Farid Shafiyev visited in International Eurasia Press Fund (IEPF) and discussed with President of the organization Umud Mirzayev about the establishment of long-term partnership relations in various directions.

Farid Shafiyev gave an interview to Eurasia Diary International Information Portal the initiative of  IEPF. He made interesting comments on the activities of the Center headed by him, the process of settlement of the Armenia-Azerbaijan Nagorno-Karabakh conflict, the "Keshikchidag" issue on the Azerbaijani-Georgian border.

Noting that, it is Farid Shafiyev's first interview to the Azerbaijani media as the head of the Center for Analysis of International Relations.

Brief Information: Farid Shafiyev was born in Baku, 1969. In 1989-1994 he studied at the History faculty of Baku State University. In 2002-2003, he received a Master's degree in Public Administration at Harvard Kennedy School. Studying at Carlton University in 2009-2015, received a Ph.D. in History. Since 1996, he has been working in the Foreign Ministry. In 1998-2001 worked at the Azerbaijan Representative Office of the United Nations. He is the Ambassador Extraordinary and Plenipotentiary of the Republic of Azerbaijan since 22 May 2009. He was the Ambassador Extraordinary and Plenipotentiary of Azerbaijan in Canada during 2009-2014 and in the Czech Republic in 2014-2019. At the same time, he was a permanent representative of the Republic of Azerbaijan under the International Civil Aviation Organization from May 26, 2011, to July 9, 2014. Farid Shafiyev was appointed as the Chairman of the Board of Center for Analysis of International Relations by the Decree of the President of the Republic of Azerbaijan on February 19, 2019.

We are presenting you the short version of the whole interview for English speaking readers. -  Will CAIR be able to provide flexible forecasts about political processes as a research center? Because there is a great need now. As you know, the latest decisions of the US Congress, occasions at the border with Georgia, created a shocking effect in society. We felt as if there were no centers you mentioned, none of these processes was predicted ...

- I hope our Center will be able to predict all such issues in advance. As I said, the Center officially established in February this year and has just begun the full operation. The staff and budget have been approved on July 15. Of course, the issues you mention are the responsibility of the think tanks. Whether we need to identify threats from Georgia, Russia or the United States and other countries to Azerbaijan, or predict economic projects that Azerbaijan should participate in these projects or not, what is benefits, how much profit can we earn and p. Frankly, we have made predictions about what happened in the Persian Gulf, and have submitted it to the government indirectly.

I think that we can make prognosis in a closed form and post them in a certain form to the public over time. You are noting rightly, I mean the soceity should be ready to the steps taken by Georgia. For objectivity, many types of research have been made in the Center for Strategic Studies and certain predictions have been made. I do not want to reveal particular content. But there are such researches and now we have presented forecasts on a number of issues, including the Georgian issue, US-Iran relations. In general, we have made some analyzes, but now I do not want to disclose them.

- While we are talking about Georgia, I want to note that Azerbaijan is a strategic ally of this country and we have numerous joint projects. Nevertheless, Georgians have created a "Keshikchidag" incidents on the Azerbaijani-Georgian border. Do you see the role of the third group in this problem?

- Yes. Of course, there is the third power. Even two countries, not one country. Of course, Armenia also has a role. It also plays a very active role. Some countries also want a new conflict in the region and high-level partnership between Azerbaijan and Georgia will weaken. Therefore, we should be watchful in the issue of Georgia. I think that emotional speeches in both countries are unconventional. There are emotional matters in every historical and religious issue. Therefore, we need to be cautious. In particular, there are many radical challenges in Georgia. But we also have. I think that we have to work with the Georgian government to solve the problem of delimitation of borders.

Azerbaijan and Georgia have strategic partnerships in many sectors which have vital importance for both countries. Historically, the two countries faced common suffering as the events of 9 April 1989 and January 20, 1990. The territories of the two countries have been occupied and all of this should encourage the two countries to work together to resolve all these issues, including the delimitation of borders.

The philosophical complex of delimitation of borders between Azerbaijan and Georgia should not be based entirely on the idea of ​​transferring the areas to one side or another. Both parties may bring historical and other evidence to claim ownership of the disputed territory. The Azerbaijani side also has consistent legal evidence that the territory belongs to it.

Religious areas should be viewed as a center of cooperation and should be the place of common past and present values, including factors such as the inviolability of borders, the free flow of people, products and ideas.

There are some powers that will be pleased with the fact that there is another conflict in the South Caucasus region between the two countries. Necessary measures should be taken to prevent primitive nationalism or religious fanaticism. In this regard, statements by official religious institutions on this issue should be appreciated, but at the same time, efforts should be made in this regard.

Negotiations on delimitation should be based on the principles of international law and should further strengthen the strategic partnership between Azerbaijan and Georgia. I think that emotional speeches should be restricted. You know that historical and sensitive issues create emotionality in the citizens. But you have to be cautious. It should be resolved within the framework of the document adopted in 1963. Remember, in 2012, this issue was on the agenda again. At that time, we did not go too far, but then the problem was deepened. Therefore, I think that this problem should be solved in 2019-20. Because the third power is already using the problem. Moreover, it is possible to use European experience here in the movement of visitors to the area. We must ensure the free flow of tourists at the temple in Keshikchidag, and we must use the temple together. But here I do not consider the transfer of land and other factors acceptable. - What do you think about the Armenian-Azerbaijani conflict resolution process?

-Unfortunately, negotiations on the settlement of the problem do not promise any perspective. This is because the other side is not interested in solving the problem.

It is known that today there is a serious struggle for power within Armenia, and the tension between the Pashinyan clan and the Karabakh clan steadily grows. The lack of stability in the country and the lack of a concrete position on the problem's solution are one of the main arguments that hinder negotiations.

However, the Armenian side uses this situation to increase its international reputation. Armenia, which represents the struggle for power as a democracy to the West, use the problem and calls negotiations with separatists. In this situation, while Azerbaijan seeks to achieve a solution through negotiations, the non-constructive position of the other party forces Baku to resort to other ways.

The most important factor for solving the problem is political will. Unfortunately, although we demonstrate this will, the opposite does not do it, can not do it, and links it to problems within the country. Tactics of "public diplomacy" have been repeatedly used in 25 years, but have no effect. Under the current conditions, "people's diplomacy" will not work. True, Armenians are very good at propaganda, especially with Western funds. 5-6 scholars appear that let's deal with the "public diplomacy". We also have 5-6 scholars who can lead us to "public diplomacy". In my opinion, "public diplomacy" is not a conversation of 5-6 scientists. In Armenia, in the Armenian community in Nagorno-Karabakh, we do not see any compromise atmosphere. There should be progress for "public diplomacy". Some in the West say that let's just start with small steps. However, experience shows that it couldn't be taken in 25 years since the ceasefire. There were different plans. I remember, in the 1990s, the British embassy tried to do so in Azerbaijan and Yerevan, and even offered to make a purchase at the Red Bridge (Azerbaijan-Georgia border). But for the past 25 years, small plans did not work.

- The cooperation between Azerbaijan and the EU has been on the agenda during recent years. In recent months, Foreign Minister Elmar Mammadyarov has said that work has been done to reach a new agreement with the European Union, and 90 percent have been settled. What are the 10 percent hindrances to the agreement?

You know that the agreement with the European Union consists of three directions. Political, economic and humanitarian. During the negotiations, small disagreements on political and humanitarian issues have been completely resolved. All the misunderstandings between the EU and Azerbaijan have been resolved over the Karabakh issue. Elmar Mammadyarov said that all these issues were resolved and the two sides agreed to reach an agreement.

The 10% mentioned issues are technical problems with economic factors. The European Union is planning to enter the Azerbaijani market with the agreement signed with Azerbaijan, and in the same way, we will integrate into the European market. But the demands of the European Union are relatively high for our products. There are problems, so we have to maintain our internal market. I want to reiterate that the only disagreement between the parties is related to the economic and technical factors and I think that if they are resolved, the agreement will be signed soon.