Death toll rises to 26 in Algeria due to wildfires - ednews.net

Death toll rises to 26 in Algeria due to wildfires 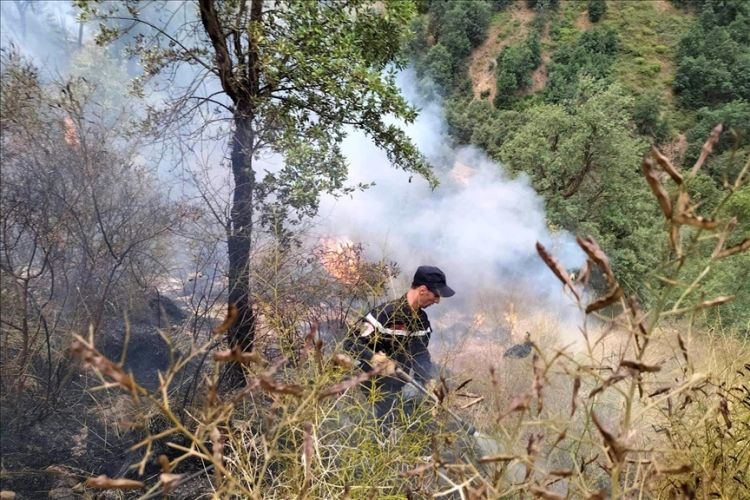 A total of 26 people have died in Algeria as of Wednesday due to forest fires that broke out in several provinces of the North African country.
Gendarmerie forces stated that a bus was burned in the village of Maliha, on the road linking the northeastern provinces of El Tarf and Annaba.
"According to preliminary information, the accident resulted in the death of eight people," it added.
The country's public radio broadcaster also announced the death of a woman and a girl as a result of forest fires in the Ain Sebt area in the northeastern province of Setif.
Civil protection officials, meanwhile, stated that teams were working to put out 39 fires across 14 provinces, most of them in the country's northeast.
President Abdelmadjid Tebboune offered his condolences to the families of the victims in the provinces of Setif and El Tarf, according to an official statement.
"Following the fires in some provinces in the east of the country, which resulted in a number of victims in both provinces, the President of the Republic, Mr. Abdelmadjid Tebboune, extends his sincere condolences to the families of the victims, wishing a speedy recovery for the wounded citizens," said the statement.
"It affirms the Provinces' stance and full mobilization of the various interests, by harnessing all human capabilities and material means to put out the fires and take care of the injured," it added.​
Roads closed due to fires
The fires stopped traffic on several roads in the northeastern provinces.
A statement from the gendarmerie said the road linking the city of El Tarf and the Bouteldja region had been closed, in addition to the route linking El Kala, also in El Tarf, and the province of Annaba.
Traffic was also halted on the road linking Guelma province and the Tunisian border, with the route linking Tunisia with the Algerian border provinces of Souk Ahras and Tebessa also closed.
Images spread on social platforms showed firefighting efforts with public participation alongside civil protection teams and the army, as well as the evacuation of hundreds of citizens from residential neighborhoods that were caught in the flames.
Footage of a Russian extinguishing plane was widely circulated. The plane was leased last June and was shown extinguishing fires in several provinces, including Skikda, El Tarf, and Jijel.
The fires coincided with a record heat wave that hit northeastern Algeria, exceeding 45 C (113 F), as well as with hot and strong southern winds.